Council has been considering a proposed extension to the existing Castle Plaza Shopping Centre and the development of commercial and residential uses on the former Hills Industry site, and the redesign of the local road network, whilst taking advantage of the proximity to public transport (bus and train).

The subject land comprises of the existing Castle Plaza Shopping Centre and the former Hills Industry site on the northern side of Raglan Avenue.

The proposal requires the rezoning of the Hills site from an “industry zone” to a “mixed use zone” in order to facilitate the development of the intended uses. Council has been undertaking a “Development Plan Amendment” (DPA) process (process to rezone the land) which has involved consultation with the public and the relevant government agencies.

In summary, the proposal envisages the following:

Contamination on the former Hills site has been re-mediated so that the land is suitable for the intended uses.

An amended version of the DPA was endorsed by Council on 25 July 2017.

The DPA has been forwarded to the Minister for planning for consideration and endorsement. 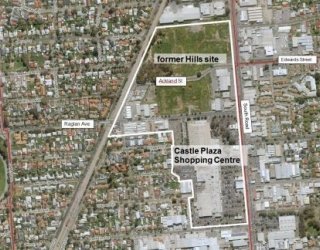