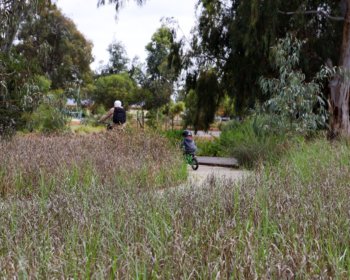 The highly coveted title is expected to bring multiple benefits, to the environment, tourism, business, education, health and wellbeing.

The bid won the support of all 17 councils, the Kaurna Nation, industry leaders, conservation organisations, community groups and schools.

Environment Minister David Speirs said the title was a “trigger to promote and connect people with on-ground action to look after our environment for everyone’s health and wellbeing as well as boost our economy through increased tourism”. 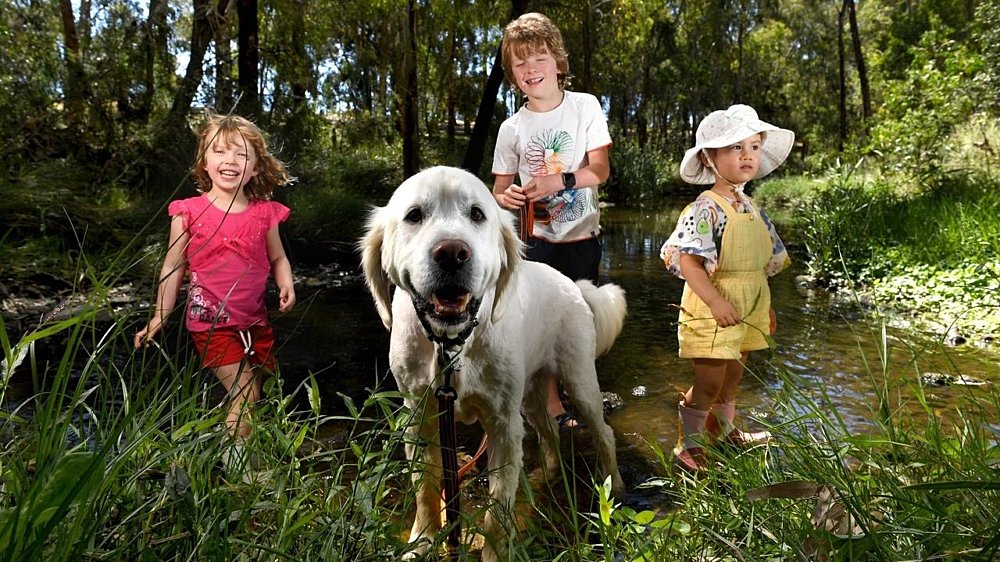 ▲ Skye, 4, and Darcy, 8, with their dog Disco and friend Temi, 2, at the Bunyip Trail, River Torrens. Picture: Tricia Watkinson

“Over the next few years, through our urban environmental board Green Adelaide, you’ll see some real on-ground action towards the Adelaide National Park City movement to create a cooler, greener and wilder city,” he said.

“This includes $5 million to green our CBD streets and places, $5 million to re-wild the River Torrens, and millions of dollars in grants to enable the community and councils to deliver climate resilient projects on-ground.”

An expert team from the Foundation, World Urban Parks and Salzburg Global Seminar assessed Adelaide’s application across 23 required criteria including the city’s landscape, community, culture, long-term vision and ability to deliver on its goals.

The Foundation’s ambition is to have 25 National Park Cities around the world by 2025, each bringing people together to make their cities’ greener, healthier, wilder and more climate resilient. Campaigns have begun in Canberra, Berlin, Tokyo, Sacramento, Galway, Madrid, Breda and Glasgow.

Foundation chairman Paul de Zylva said he was delighted to welcome Adelaide into the growing family.

“At a time of great health, climate and ecological anxiety, becoming a National Park City is an incredibly positive, hopeful and pragmatic step for a city to take,” he said.

“Becoming a National Park City is not just about a collective vision or the status of the city, it is a statement of intent and a way of organising to radically improve life for both people and wildlife, now and into the future.”

Kaurna Elder Jeffrey Newchurch said he and his people firmly believed in the bid.

Botanic Gardens director Michael Harvey, who arrived in SA from NSW earlier this year, said Adelaide’s reputation as a garden city was “as well deserved as one can imagine”.

“Green spaces in urban areas are really of fundamental importance in so many ways, to human wellbeing but also to city resilience,” he said, alluding to the climate change.

Green Adelaide chairman Professor Chris Daniels encouraged everyone to get involved, from growing and tending plants to sharing nature in pictures, songs and art.

Conservation SA chief executive Craig Wilkins said the declaration was “just the beginning of the journey, not the end”.

'Adelaide named the world’s second National Park City at the World Urban Park Congress' written by Clare Peddie originally seen in The Advertiser, 10 December 2021. Licensed by Copyright Agency. You may only copy or communicate this work with a licence.

Main image: Cyclists take a ride through Oaklands Wetland in the City of Marion