Adelaide Film Festival in the ‘Burbs 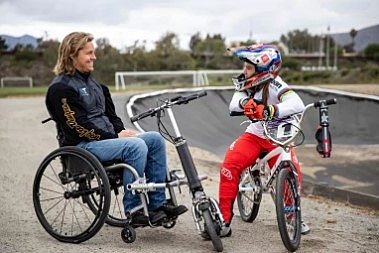 The City of Marion is supporting the 2022 Adelaide Film Festival with two special screenings - a Spielberg classic poolside and a documentary about southern suburbs BMX champion Sam Willoughby.

Patrons will be able to watch the M15+ thriller on the big screen from the stands or in the pool. There will even be inflatable sharks to help set the mood.

A Jaws-themed menu will be available at the centre kiosk from 7 pm - 8.15 pm.

Later in the month, the world premiere of Ride will be screening at Marion Even Cinemas and Pace Nova Eastend Cinemas.

Ride tracks the lives and careers of Sam and Alise Willoughby, two champions who fall in love and conquer the world of BMX.

Sam Willoughby was born in Bedford Park in 1991 and grew up to become a world champion BMX rider and Olympic silver medallist.

In 2016 Sam suffered a serious neck injury after crashing during training. The accident led to his toughest challenge as he went through intensive therapy and rehabilitation.

Some 15 months after he was declared a tetraplegic, Sam celebrated his wedding by dancing (in braces) with his wife Alise Post.

Alise is also a BMX world champion and Olympic silver medallist. Sam met Alise in 2008 and proposed to her in 2015.

The documentary Ride paints a bold picture of re-invention in the world of disability and is being screened on Thursday, 27 October, at 6 30pm, at Marion Event Cinemas and on Sunday, 30 October, at 11.30 am at Palace Nova Eastend Cinemas.

For tickets and more info, visit the AFF website.