Bike tracks take off at City of Marion 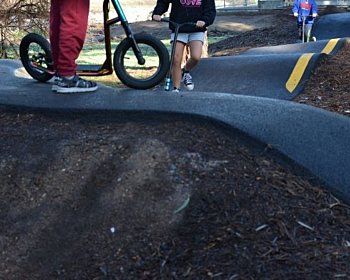 Building and upgrading recreational bike facilities is a priority for the City of Marion which has 16 tracks across the Council, including four constructed in the past year.

In addition, work on the City of Marion’s largest pump track adjacent to the Sam Willoughby International BMX Facility at O’Halloran Hill is expected to start early next year.

This publicly-accessible, bitumen-sealed track will be suitable for recreational riding and events with local BMX Clubs having input into the design process.

Young people in the City of Marion also played a part in shaping the four pump tracks built this year at Hallett Cove, Sheidow Park and Marino.

Working with contractor Jason Cousins from Youth Services, the City of Marion incorporated the feedback from track users into the track designs, hosted workshops with students from a local school and conducted mentoring and training programs with a group of young people.

Youth Services is a social enterprise that uses the profits from building tracks, mountain bike paths and other youth spaces to fund training and mentoring programs for young people.

Local children who used the old dirt jumps at Hugh Johnson Boulevard Reserve inspired the design of the new sealed junior jump track which is part of a recent $1.6 million upgrade of the popular Sheidow Park recreation area.

Students from Hallett Cove School also participated with Youth Services on the design of the new jump park replacing the old BMX track at Capella Drive Reserve at Hallett Cove, attending several workshops to learn about what is involved in creating bike facilities.

In the last design workshop, Jason invited a small group of students who were keen riders back onto the site during construction to hone their track-building skills.

Besides the jump park, a junior pump track was constructed near the skate park as part of a recent $3 million, two-stage upgrade of Capella Drive Reserve.

Local riders also had some input into the design of the recently completed sealed pump track at Nimboya Road Reserve at Marino.

Besides tracks, the City of Marion has built many paths for younger children to scoot and ride in playgrounds and there are numerous trails for cycling and walking in Council recreational areas. Many of them link in with State Government cycling and walking trails.

The City of Marion has some 300 reserves and 88 playgrounds and has recently reviewed its Open Space Plan to renew, develop and improve recreational areas within the City of Marion.

Improving youth recreation spaces is one of the focus areas of the plan and that includes building bike tracks and installing facilities such as three-on-three basketball courts and netball rings.

The history of urban development in the City of Marion has influenced the amount of open space (managed by Council and State Government) that is available in different communities.

The following is a list of all the existing bike tracks in the City of Marion.