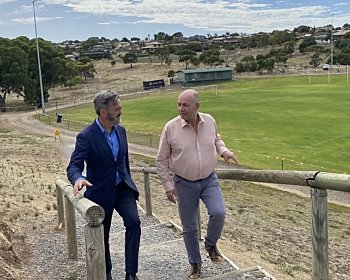 The City of Marion will spend an extra $90,000 to add some finishing touches to a $3 million redevelopment of Capella Drive Reserve at Hallett Cove.

The new surface is expected to reduce ongoing maintenance costs over the long term.

An additional $30,000 will also be set aside to remove the Glauca trees near the skate park.

The trees are a designated pest species. Removal of the trees will also improve “passive surveillance” of the new skate park area.

Council will also include CCTV security equipment in the reserve upgrade under Council’s existing CCTV program.

The City of Marion has been upgrading Capella Drive Reserve over two stages thanks to a $1.29 million grant from the Federal Government through the Local Roads and Community Infrastructure Program.

With the extra works approved this week, Council will end up contributing around $1.854 million to the works.

Stage 2 is scheduled for completion at the end of July and involves the construction of a new playground, pump track, public toilets, and the installation of ninja warrior fitness equipment.

An official opening of Stage 2 is planned for August 13 to coincide with the City of Marion youth event Skate Daze 2.

Skate Daze 2 will feature lives bands, a youth expo and demonstrations and is being funded by Council’s Youth Development Grants.