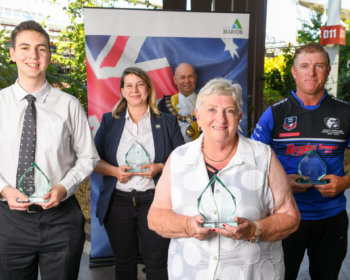 Pauline Glover, a resident who has spent decades reaching out to the vulnerable in the Marion community, and James Beaumont, an advocate for young people struggling with disability and mental health issues, have received the City of Marion’s Citizen and Young Citizen of the Year Australia Day Awards.

“We had over a dozen high-calibre nominations for our Australia Day Awards and those individuals, groups and events who were nominated reflected our diversity with applications covering everything from sport, dog obedience and local history, to service clubs, hall committees and youth mentoring,’ Mayor Kris Hanna said.

“I congratulate all our nominees and I thank them for everything they do to make Marion a better place.”

Citizen of the Year Pauline Glover has been part of the leadership team and a zone councillor for VIEW clubs in the southern region. VIEW (Voices Interests Education of Women) is a volunteer group that partners with The Smith Family charity.

For more than a decade Pauline has also been the coordinator of Rugs With Love, a group that makes rugs for vulnerable children and during the COVID-19 pandemic she has reached out to the community through a street library, morning teas and grocery drops to struggling families.

The Dover Gardens resident has also served as Chairperson of the Seaview Downs Primary School Governing Council and was part of the successful advocacy to secure $15 million to rebuild the school.

Pauline is also a Life Member of the Australian College of Midwives, honouring her 40 years of service to midwifery.

Young Citizen of the Year James Beaumont has overcome enormous challenges in his early life to become an advocate for young people struggling with disability and mental health issues.

The 19-year-old from Oaklands Park is a mental health advocate at the Royal Adelaide Hospital and volunteers his time as a consumer advocate for mental health services in the Southern Adelaide Local Health Network.

He was invited by the City of Marion to join its Youth Advisory Committee and has been involved with the City Marion to facilitate events and educational sessions for youth in the area.

James has also taken part in the 2020 and 2021 Youth Parliament Programs run by the YMCA.

The Sports Person/Team of the Year Award was presented to the South Adelaide Rugby League Club Women’s Team.

The club’s Women’s Team managed to achieve two successive, undefeated seasons in 2020 and 2021.

The team has also had two players drafted to the NRLW - Women's Rugby League - Teliya Hetaraka in 2020 and Foxy Clune in 2021.

As a group they have also established the South Adelaide Rugby League Club Women’s and Girls’ Program where they run strength and skills training in the off-season and invite the community to come and try a new sport or build up their fitness.

In a year when very few major events were able to be held, the music festival Skate Daze, went ahead and its success has led to the presentation of Marion’s Community Event of the Year Award.

Skate Daze was held at the Oaklands Recreational Plaza as part of the Umbrella Festival, an open-access live music festival presented in 2021 by Music SA.

The event was overseen by Susan Evans, but all the bands and staff involved were young people and nearly 400 people attended.

Skate Daze succeeded in its aim to engage youth in the arts and alternative recreation and provide a safe space for young people to feel welcome and try new things.

The event mentored many aspiring young performers from local schools in the area, providing them with on-stage experience under the guidance of experienced performers. One of the groups that took part now plays regularly at city venues.