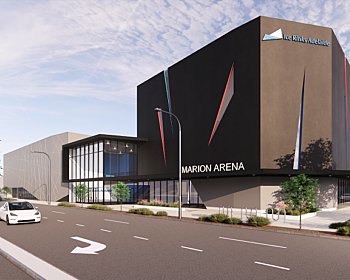 The City of Marion has commenced public consultation on a proposal from a group of private investors who want to lease a piece of community land at Marion so they can build and operate a $20 million international standard ice rink and rock climbing facility.

At their General Meeting Tuesday night, Elected Members approved community engagement on two separate but related consultations on the intention to lease the site for 42 years and the adoption of a new site-specific Community Land Management Plan.

Ice Rinks Adelaide and the Pelligra Group want to build a single rink arena with three different standards of rock climbing walls on a 10,000sqm site at 262A Sturt Road.

Mayor of Marion Kris Hanna said the two concurrent public consultations were the first steps in the proposal that still had to go through a formal planning process if the community agreed to lease the land.

“Marion Council is satisfied that the best use of this land, in one of our premier recreation precincts, is a world-class ice rink. Seating for 450 will allow the facility to be used for a wide range of events,” Mayor Hanna said.

“We will now ask the community and we hope they agree.

“Head to the Making Marion website for details and to make a submission. Details of the proposal are also available at Council’s administration building at 245 Sturt Road, Sturt.

“Residents can also send in a postal submission. Just call the council on 8375 6600 if you like assistance in providing your feedback. Public consultation closes on Friday, June 17.”

The Marion arena proposal is smaller in scale than an original two-rink concept originally put to the council back in 2018 and involves no capital investment from the council.

The developers would pay rent over the term of the lease and offer discounts for City of Marion residents who use the facility.

If the community endorses the lease and draft Community Land Management Plan, the investors are also required to submit a Development Application and must satisfy all planning requirements including consideration of traffic and parking.

Any approved lease agreement would give the City of Marion the option to purchase the arena from the private consortium, for an amount agreed to by both parties, at the end of 42 years.

If the proposal receives development approval, work on the facility could start later this year.

Once completed, the arena will boast an international standard ice rink with a seating capacity of up to 450 spectators.

The rink is expected to be the home of South Australia’s Australian Ice Hockey League team, Adelaide Adrenaline, possibly in time for the 2024 season.