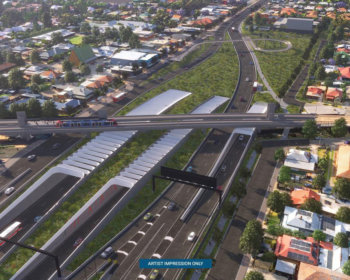 Article from The Advertiser, 23 October 2021

Motorists will be able to travel from the southern suburbs to the outskirts of the Adelaide CBD without stopping at traffic lights following the construction of an overpass connecting the Torrens to Darlington motorway directly to Anzac Highway.

Detailed designs jointly released by the federal and state governments reveal plans to transform the intersection of Anzac Highway and South Road in a major development that will alleviate pressure on other key routes and accommodate future growth.

The project milestone comes weeks after residents of 110 homes at Glandore were notified their properties would be compulsorily acquired, and shows exactly how the land will be used.

The two three-lane southern tunnels will surface in that area at the “northern portal”, near where the Glenelg tramline overpass crosses South Road.

In order to access the city, those travelling north through the tunnel will exit onto an elevated ramp and overpass, which will connect the motorway to Anzac Highway without the need to stop. 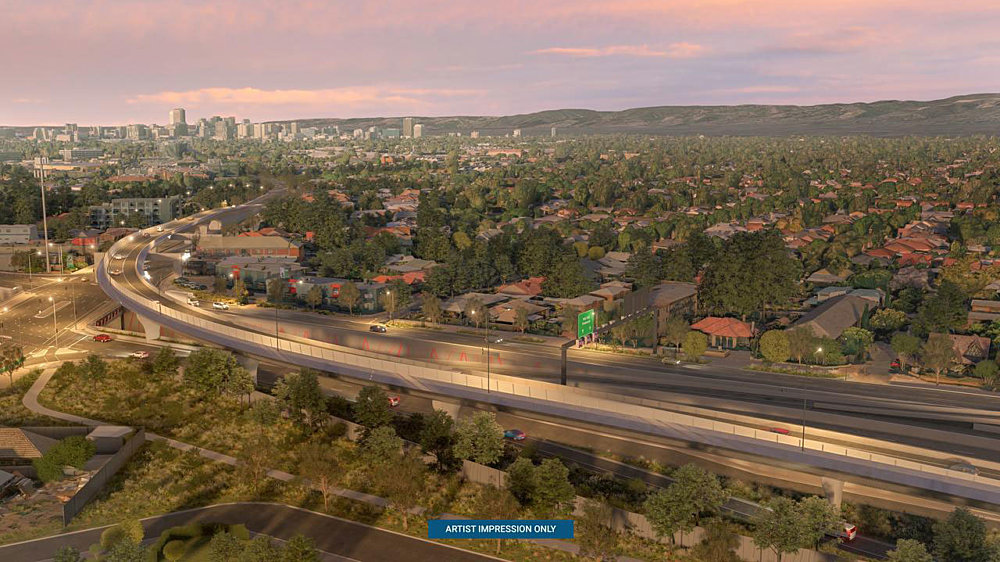 ▲ An elevated ramp will take motorists from the south directly and non-stop from the Torrens to Darlington motorway to Anzac Highway on a new overpass over the interchange at South Road. Supplied: SA Government

The ramp will stretch about 400 metres onto Anzac Highway before it lowers to meet the ground. No property acquisition along the highway will be required to build the structure.

Northbound traffic on the existing South Road, including motorists who have come from Cross Road, will be able to merge onto the motorway using a ramp just south of Anzac Highway.

Federal Urban Infrastructure Minister Paul Fletcher said the project, part of the $9.9 billion final stage of the North-South Corridor, will alleviate congestion across Adelaide and move people and freight faster.

“The T2D is the final piece of one of the most significant projects in the state’s history and will not only dramatically reduce travel times for people going north and south, but will also make it much quicker and safer for the thousands of motorists travelling into the city,” he said.

▲ The tunnels will surface at Glandore, near where the Glenelg tram overpass crosses current South Road. Supplied: SA Government

“It will have a practical, permanent and overwhelmingly positive impact on not just Adelaide but the entire state,” he said.

The plans were revealed in detail during a briefing held this week with the Sunday Mail, both ministers, North-South Corridor executive director Susana Fueyo and engineering director Malcolm Short.

The tramline will remain and a second overpass will be constructed over South Road, which will be shared between pedestrians and cyclists and ensure safe access to Black Forest Primary School from the Glandore side.

A new dedicated drop-off and pick-up area will be created at the front of the school, which will be set back from South Road traffic.

About 120 mature trees along Anzac Highway — which make up part of its memorial avenue — will need to be removed to accommodate the elevated ramp and structure, but every tree removed will be replaced at an appropriate location.

“I don’t think it would be a beautiful thing to watch,” she said. “It’s really nice there … how it is there at the moment.”

Another resident, who wished not to be named, said: “it doesn’t matter what we as residents think, at the end of the day, the government still get their paychecks.”

Mr Wingard said the project team would also work with veterans' groups to ensure the new designs continue to pay tribute to the Anzac memory.

“We are committed to making sure this area remains one that all South Australians can be proud of,” he said.

Four ventilation structures designed to maintain air quality will be positioned on the project — one at each of the tunnel portals — and each will be about 15 metres high.

The structure is included as a rectangular grey object but its design has not been finalised and the project team will engage further with the community during an upcoming consultation process.

Construction of the southern tunnels is expected to start in late 2023, with the entire 10.5-kilometre Torrens-to-Darlington project set to be complete by 2030.

It is predicted to cut travel time by 24 minutes, it will include two sets of parallel tunnels with three lanes going each way under South Road, as well as a series of surface and lowered motorways. A final reference design for the upgrade will be completed later this year.

'Detailed plans for part of Torrens to Darlington motorway show elevated ramp connection to Anzac Highway' written by Kathryn Bermingham originally seen in The Advertiser, 23 October 2021. Licensed by Copyright Agency. You may only copy or communicate this work with a licence.