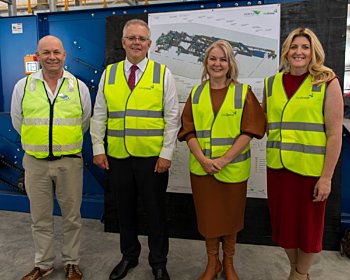 Robotic quality control systems are among the innovative technology that will soon be used to process household recyclables at a new best practice recycling facility being built in southern Adelaide. The new facility at Seaford Heights, which has recently been awarded $3.1m toward additional processing technology upgrades, will maximise the value of material in the yellow bin and meet the Australian Government’s commitment to build the nation’s recycling capacity and stop the international export of low-value material.

The Southern Materials Recovery Facility (SMRF) represents an investment of more than $24m, and it will process at least 31,000 tonnes per annum of ‘yellow bin’ recyclables. The $3.1m announced on Tuesday 18 May 2021 is joint funding from the South Australian and Australian Governments through the Recycling Modernisation Fund (RMF), with the funds used to install additional optical and robotic sorting systems to further improve the quality of recovered materials.

The SMRF is a joint initiative of Australian recycling and resource recovery specialist, Re.Group, and the Southern Region Waste Resource Authority (SRWRA), a joint subsidiary of three South Australian local councils – City of Onkaparinga, City of Marion, and City of Holdfast Bay.

The SMRF has capacity to process more than 60,000 tonnes of recyclables per annum, thanks to $5.35 million in funding support from the Australian Government through the Community Development Grant Programme and confirmed in the recent Federal Budget. This will allow the facility to service other regional councils and commercial businesses from the surrounding area, and help to create a more resilient recycling sector for all of South Australia.

SRWRA Chair Mark Booth said the project was only possible thanks to the collaboration and partnership fostered between local government and private enterprise. “The unanimous support of our constituent councils has allowed us to fast-track this important project and place the orders required for the new facility to be operational in the second half of 2021,” said Mr Booth.

“The strategic need for a recycling facility south of the city, and for increased recycling capacity across the state of South Australia, has been understood for years; the leadership shown by Holdfast, Marion and Onkaparinga Councils means SRWRA is now making this project a reality.”

It is anticipated that the SMRF will employ 18 people on a full-time basis for the next 20 years. These jobs require advanced manufacturing skills, and will see staff using cutting-edge technology to process the region’s recyclables. Re.Group Managing Director, David Singh said that these opportunities were vital in a jobs market recovering from COVID-19 and its associated restrictions.

“We’re really pleased to be in the business of improving recycling and creating new jobs in Adelaide. There’s a strong history of manufacturing and technology in the state and we’re really looking forward to tapping into the talent and capabilities of South Australians to improve recycling and resource recovery in the region,” said Mr. Singh.

The SMRF represents an investment of over $24 million in the southern Adelaide region, which will result in resilience in the state’s waste management and resource recovery capabilities. The additional funding through the Recycling Modernisation Fund was praised, for helping ensure that better recycling outcomes can be delivered in a costeffective way for local communities

“We are thrilled the South Australian and Australian Governments are supporting our efforts to invest in growing the Australian recycling industry and building local markets for recycled products. This is great news or the environment and for the local community,” said Mr Booth.

“We’re also extremely grateful for the tireless efforts of the countless individuals who have worked to ensure this project goes ahead – both within Government and in the private sector.

Equipment for the SMRF is being sourced from RDT Engineering – a leading Australian recycling specialist, committed to maximising local fabrication of non-specialist items. The design ensures that outputs from the facility are ‘COAG Export Ban-ready’, and meet the highest quality standards.

The facility is expected to be operational by the end of June, 2021.

The Southern Region Waste Resource Authority (SRWRA) is a regional subsidiary established by the Cities of Onkaparinga, Marion and Holdfast Bay, pursuant to Section 43 of the Local Government Act, 1999. SRWRA is responsible for providing and operating waste management services on behalf of our constituent Councils.

SRWRA’s core business activity is the management of the wholly-owned SRWRA Landfill and Recycling Operation, which employs innovative resource recovery approaches in managing all products and materials as valuable and finite resources. SRWRA is one of South Australia’s major landfill operations currently receiving over 100,000 tonnes of waste annually.

Since 1996, the Authority has been extracting landfill gas (methane) through its gas management plant. A joint venture operation with Integrated Waste Services (IWS) has developed through 2016/17 with significant improvements in the recycling programme through the jointly operated Southern Recycling Centre (SRC) realising significant improvements in the reduction of waste to landfill.

Re.Group is an Australian recycling and resource recovery specialist, with a vision to create a wasteless society.