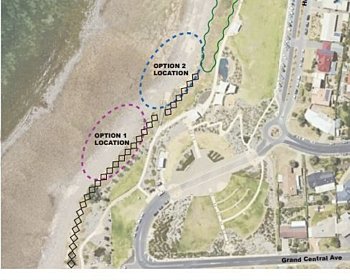 The City of Marion is seeking community feedback on a ‘seaside outdoor pool’ proposal for Hallett Cove with an online public survey running until Monday, August 15.

A “sea pool” concept at this popular part of Adelaide’s coastline was first floated by residents in 2018 when they ran a community petition and collected around 5,000 signatures.

Council and the State Government collaborated to commission a feasibility study in 2019 which ruled out a tidal ‘sea pool’ structure because of the topography of the cove but suggested a seawater-filled outdoor pool extending above the waterline could be explored and might form part of a protective structure to protect the area from coastal erosion.

Council has not yet committed to building any pool at Hallett Cove but in response to high levels of community interest, it has further collaborated with the State Government to fund a scoping study and some community consultation.

The survey currently underway is the start of that community engagement with a letter outlining the consultation sent to residents in the Hallett Cove area last month.

Feedback from the survey will inform the development of some draft concept plans which are expected to go back to the council for consideration in the first half of 2023 before further community consultation is conducted.

The survey puts forward two suggested locations for the pool proposal at the base of the Heron Way Reserve embankment and asks questions about a range of issues including parking.

The 2019 feasibility study indicated a seawater-filled outdoor pool would cost more than $5 million but significant increases in construction costs in recent years indicate the initial capital costs could be up to $10 million, depending on the final design.

If the proposal is eventually endorsed by Council, funding from other levels of Government would be sought. Council would also have to commit to ongoing maintenance costs.

It is estimated around 75,000 people visit the Hallett Cove foreshore every year. Based on visitation data from other sea pools and Australian aquatic facilities, it is estimated that between 100,000 and 150,000 people per annum would visit a seaside outdoor pool at Hallett Cove.

For more information about the pool concept and the community survey head to www.makingmarion.com.au/hallett-cove-sea-side-pool