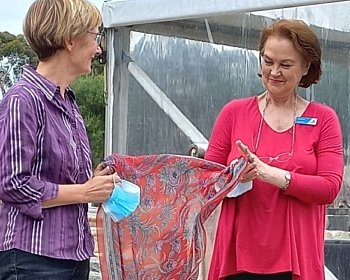 Nearly 180 years after his death, the co-founder of Marion – Henry Nixon – has had his final resting place publicly identified and commemorated with an official plaque.

Until now, this significant figure in the early history of the City of Marion has lain in an unmarked grave in the West Terrace Cemetery in Adelaide.

Henry Nixon’s plaque and renovated gravesite were officially unveiled on April 12 in a ceremony conducted by the Adelaide Cemeteries Authority, the Marion Historical Society, and the City of Marion Heritage Research Centre.

Henry Nixon was a close friend and an assistant surveyor to Colonel William Light, the first Surveyor-General of South Australia, and a contemporary of Boyle Travers Finniss.

The three men established the private surveying company Light, Finniss and Co. Nixon and Finniss went on to purchase the land and lay out the village of Marion in 1838.

Unfortunately, Nixon suffered ill health and died in 1843. While the former British Army Officer from the 96th Regiment was buried with military honours in Adelaide, his wife and four children returned to England the following year and his grave was left unmarked.

Two of his sons returned to South Australia in the 1850s where they inherited unsold allotments in the village of Marion. They died without children and Nixon has no known descendants living in Australia.

Nixon’s unmarked grave came to the attention of the Marion Historical Society in 2020 when members went on a guided tour of the West Terrace Cemetery with Adelaide Cemeteries Chief Executive Officer, Robert Pitt.

Society Secretary Heather Latz said members noted that the grave of Marion co-founder Boyle Travers Finniss (who went on to become the first Premier of South Australia) had a headstone and a heritage information board but Henry Nixon’s grave was just bare earth.

“The closure of the Marion Historical Society has been on the horizon for a few years and the committee had begun to talk about worthwhile projects on which to spend our funds before closing. We decided that renovating Henry Nixon’s grave might be one of them,” Ms Latz said.

“Adelaide Cemeteries supported the idea and Mr Pitt’s offer to contribute $500 towards the plaque got the project over the line.

“Henry Nixon was the co-founder of Marion. Our members believe it is important that his grave is marked and that his life story is commemorated as part of the early history of our city.”

Henry Nixon is remembered in the names of Nixon Street, Marion; Nixon Terrace, Gawler; and Nixon Lake in Quebec where, prior to his migration to the colony of South Australia, he spent some time in 1828 exploring the land around the Saguenay River as part of a group commissioned by the government of Lower Canada.