Hive of activity at Glandore Oval 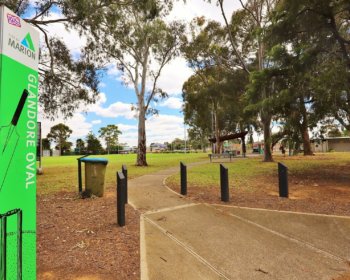 Glandore Oval will be a hive of activity next week with civil works for new lighting and preparation work for the planned cricket pitches getting underway as part of the City of Marion’s approved redevelopment of the precinct.

In addition, the State Department of Infrastructure and Transport (DIT) will be collecting soil and groundwater data for the Torrens to Darlington (T2D) Project, the final piece of the multi-billion-dollar North-South Corridor.

This work involves borehole drilling in a section of the grounds over two weeks and is not related to the Council’s work within the oval precinct.

DIT works will be conducted between 7am and 5pm, and fencing will be installed to prevent public access.

This fencing will be condensed after hours. Driveway access at locations adjacent to the drilling will be maintained for the duration of the work.

Meanwhile, on March 15 Council contractors are scheduled to start civil works for the new AFL-compliant lighting towers at the oval.

The old towers are being replaced with new, 25m high structures with energy-efficient LED light fittings that will evenly distribute light across the oval and reduce light spill into neighbouring properties.

These works are expected to be finished by mid-April, at the end of the cricket season and the beginning of the football season for the Westminster Old Scholars Football Club.

Workforce and material delays have prevented this section of the precinct upgrade from being completed any earlier.

Work is also starting next week on constructing the new turf cricket pitches.

Site access via Alpha Industries is scheduled to close on March 18. Light vehicles will access the site primarily around the oval with entry via Margaret Street or Naldeera Street.

Work is expected to be completed by the end of March with the redevelopment of the rose garden scheduled to begin at the end of April.

The rose garden design has been updated with a bench, trees, paths, upgraded irrigation and a grassed area for informal community recreation.

Details about the exact number of rose bushes being removed and relocated are still being finalised but the Black Forest Primary School will be offered up to 10 bushes and any remaining bushes will be made available to the public.

If you have any queries about the Council’s work at Glandore Oval, please contact customer service on 8375 6600 or email council@marion.sa.gov.au

Any questions about the DIT works for the T2D project should be directed to the department project team on 1300 951 145 or email T2D@sa.gov.au