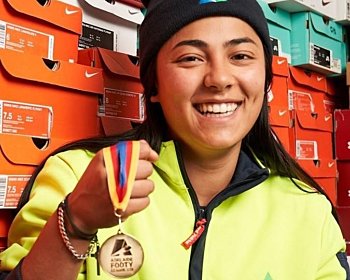 Just a year on from winning the 2021 Adelaide Footy League best and fairest after playing half a season, a local women’s footy star has won yet again, this time playing through a broken foot.

25-year-old Morphettville Park Football Club sensation Celestina Dona said she was “in shock” after being awarded the Dutschke Medal for the second year running on Monday night as the Adelaide Footy League division one women's most outstanding player for 2022.

The star ruck/forward - who also represents Norwood in SANFLW - unknowingly fractured her foot in round two of the season but played through the pain, dominating for the Roos and polling a winning 19 votes.

“It’s going to take a lot to stop me playing footy,” Dona said.

“I just continued playing with foam padding on my foot and finally got an MRI in round seven which revealed I had fractured three bones,” Dona said.

“I’m in shock, I definitely wasn’t expecting to be able to win another Dutschke Medal - it’s so humbling and it’s a great motivator to always go out there and go at my hardest.”

Dona was voted best on ground on five separate occasions this year, improving her ability as an undersized ruck and combining brilliantly with star midfielder Brianna Walling.

She said hitting the gym more regularly this year was key to her development in the position.

“Because I’m shorter and smaller than a lot of rucks it was easy for opposition players to body me out of the contest, so I went out of my way to lift weights more and build my upper body strength which I think has really helped,” Dona said.

“Brad Ferrall and the rest of the coaching staff, my team and everyone else involved at the club have definitely played a role in my success too.

“This is my fifth year at Morphettville Park and I’ve loved every second. Being here has not only made me a better footballer but a better person as well.”

The Roos finished top in division one yet again this year and booked their spot in the grand final last Saturday, giving themselves an opportunity to win a second straight flag.

“It would be amazing to take another premiership home,” Dona said.

“If we can keep it together on grand final day and play to our game plan and style we’re a big chance.”

As for what the future holds, Dona, also a hard worker away from the game, has considered a change of scenery.

“My goals at the moment are definitely work focused and I’ve been offered a really good opportunity to work away at the mines next year,” she said.

“I won’t be here in Adelaide as often as I’d probably like to be but you’ll definitely find me at Morphies every time I’m back.”

EVERY WOMEN’S BEST AND FAIREST WINNER

'Unstoppable local phenom played in pain to snare medal' originally seen in Adelaidenow Messenger Sport, 3 August 2022. Picture: Matt Loxton. Celestina Dona at home in Mitchell Park with her remarkable high end shoe collection (500 pairs) and Division one Dutschke Medal in 2021 .Licensed by Copyright Agency. You may only copy or communicate this work with a licence.