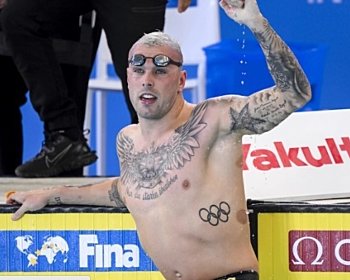 Marion Swimming Club members have taken a haul of medals at the 16th FINA World Swimming Championships in Melbourne, including a 100m freestyle gold medal for local star Kyle Chalmers.

Marion Club swimmers Madison Wilson and Meg Harris were part of the gold medal-winning team that took out the 4x100m relay title last week, setting a new world record of three minutes 25.43 seconds. Other members of the team were Emma McKeon and Mollie O’Callaghan.

Club members also took out silver and bronze medals in the championships which finished on December 18.

Australia has snatched the 100m freestyle double at the short course world championships with superstars Kyle Chalmers and Emma McKeon continuing the gold rush with their maiden individual world titles.

The host country has now won eight gold medals after the heavyweight duo stormed to victory in Melbourne on Thursday night while Chalmers also anchored the men’s 4x50m freestyle team to a last-gasp win.

Australia only trails Team USA in the medal tally by one gold medal.

Despite owning 17 Olympic medals between them, neither McKeon nor Chalmers had previously won an individual world championship title at either short or long course.

With her former pop star boyfriend Cody Simpson watching on, McKeon stopped the clock in 50.77 seconds, touching 0.10 ahead of defending champion Haughey.

“It was a tight finish – I only just realised after the race but to get my hand on the wall first is all you really want,” McKeon said.

The reigning 50 and 100m Olympic champion, McKeon signalled her intentions with a blistering relay leg on Tuesday night which helped Australia win gold in the 4x100m freestyle relay in world record time.

World record holder Chalmers motored home in the final lap of the men’s 100m freestyle final to reel in leader Jordan Crooks from the Cayman Islands, who faded from the medal positions.

Chalmers touched the wall in 45.16 – outside his world best time of 44.84 – with Frenchman Maxime Grousset second in 45.41 and Italian Alessandro Miressi taking bronze in 45.57.

“I had to pull out of the last three world short course championships due to injury and health issues so for me to finally make it to one and stand on the top of the podium is something I’m going to remember for the rest of my rest of my life,” 24-year-old Chalmers said.

While the Australian women, with McKeon on board, had to settle for silver in their 4x50m freestyle relay behind the USA, Chalmers grabbed gold in the men’s relay with a powerhouse final lap to pip the Italians by just 0.04.

Isaac Cooper led the Australian team out with Matt Temple and Flynn Southam following before Chalmers hit the water in fifth spot.

But the speed king mowed down the field with a split of 20.34.

As well as his relay gold Cooper, who won bronze in the 100m backstroke, shocked the 50m backstroke field and will go into the final as the fastest qualifier.

The 18-year-old was banished from the Commonwealth Games team for misusing prescription medication but has bounced back in style.

“It was really tough today as the fatigue is really setting in and in the warm-up pool I felt horrible,” the Queenslander said.

“I’ve known I’ve had that speed for a while and I’m glad I could execute.”

'Chalmers, McKeon world Champions at last' originally seen in InDaily, 16 December 2022. Picture: Kyle Chalmers celebrates after winning the gold medal in the 100m Freestyle Men Final at the World Championships in Melbourne. Photo Giorgio Scala / Deepbluemedia / Insidefoto/Sipa USA. Licensed by Copyright Agency. You may only copy or communicate this work with a licence.