Marion ticks all the boxes for long-term investment 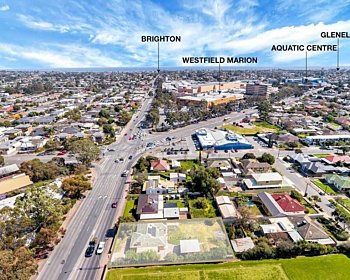 The best South Australian areas to invest in for steady long-term property value growth are in Adelaide’s southwest, a new report reveals. In his National Top 10 Best Buys of 2020-21 report, property analyst and Hotspotting founder Terry Ryder, identified the Marion Council district as an area tipped to record strong capital growth over the next five to 10 years. He believed Adelaide was about to go through a “significant growth period”.

But he said the Marion area stood out most for several reasons – affordable property prices, strong rental yields and low vacancy rates, as well as large infrastructure projects, including the Tonsley redevelopment.

“Adelaide, for me, is both the most consistent market of the capital cities in Australia but also the most under-rated city in terms of its property market,” Mr Ryder said.

“Marion stands out for me because it has so much to offer in terms of what may attract people to an area."

“This part of Adelaide has great existing infrastructure and upcoming events that will add to that.”

The report said the Tonsley Innovation District was well-placed to help the city recover economically from the COVID-19 slowdown, with innovative research, technology and science start-ups, businesses and a new teaching hospital and university campus.

There were plans to build more educational facilities and a hotel and student accommodation at Tonsley, while transport upgrades were improving connectivity and creating more opportunities for businesses.

Many suburbs in the Marion district had median house prices in the $400,000 range, while rental yields were often between 4 per cent and 5 per cent and vacancy rates were generally below 0.5 per cent.

LJ Hooker Brighton principal Peter Hurcombe said Marion LGA had gone through many changes over the years and as a result was becoming a more appealing area to buy into, especially while it was still affordable.

“That area was a sleeper for a good period of time but not anymore – that south west pocket has become very popular,” he said.

“Certainly the infrastructure in the City of Marion is at the top end of what you can get and there’s been a lot of (property) development in those areas as well.

“It’s a really good area to invest in going forward because it is getting stronger and stronger.”

'Marion ticks all the boxes for long-term investment' originally seen in the Sunday Mail, 10 January 2021. Licensed by Copyright Agency. You may only copy or communicate this work with a licence.