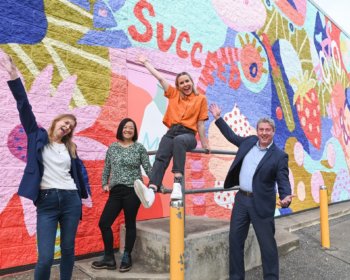 A 40-metre-long mural celebrating the retail history of Edwardstown, its sporting and multicultural community and its connection to First Nations people is being officially unveiled by the City of Marion on Wednesday, July 20.

The mural is a partnership between the City of Marion and the Vicinity group, which provided the wall space at Castle Plaza, Raglan Avenue.

It was painted by artist Sair Bean with Elizabeth Close contributing First Nations elements to the design.

A community celebration to mark the completion of the mural is being held at 11am on Wednesday, July 20.

The event will start with a traditional smoking ceremony and Welcome to Country followed by a morning tea with City of Marion representatives and representatives from Vicinity, Castle Plaza retailers and Edwardstown businesses.

Marion Mayor Kris Hanna said the mural was an example of Council’s efforts to improve the amenity of the area.

“This is a precinct of hardworking businesses which deserved a bit more attention from Council.

“Four years ago Council set out to improve the look of the area, the traffic situation and the general vibrancy of the district. We spent over $1 million and secured $205,000 in State grant funding to support more than 65 initiatives including a street tree planting program, improvements to traffic, the development of an Edwardstown brand and the running of networking events and workshops to assist businesses.

“The result is a more engaged business community and almost 100% occupancy of premises.

“Today the Edwardstown Employment Precinct is home to more than 1,700 businesses and 4,500 jobs; injecting $1 billion into the local economy every year.”

The Castle Plaza entrance statement is the third mural in the precinct. The first at Raglan Avenue and Wilfred Street celebrates the precinct’s manufacturing history and the second at Conmurra Avenue pays tribute to the area’s connection to the car industry.