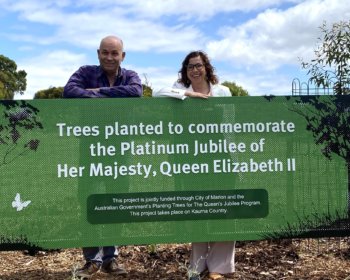 The City of Marion has received funding from the Australian Government Planting Trees for The Queen’s Jubilee Program for a revegetation project in the reserve south west of the O’Halloran Hill Recreation Park at Sheidow Park.

A ceremonial planting of an advanced Eucalyptus microcarpa to mark the project was conducted in September.

Funding from the Australian Government Planting Trees for The Queen’s Jubilee Program is being used to help create a canopy cover of 20% vegetation in Nari Reserve to improve visual amenity, increase the biodiversity value, expand green corridors, reduce noise pollution, and cool the area.

“The Queen planted thousands of trees during her reign so this is a fitting tribute to mark her 70 years on the throne, and one that will improve the local natural environment for generations to come," she said.

More than 700 locally sourced Eucalyptus seedlings will be planted in Nari Reserve in autumn 2023 with volunteers from The Friends of Glenthorne.

Some 600 trees and seedlings were planted at Nari Reserve in autumn 2022 by volunteers to support the endangered Grey Box Woodland and to provide habitat for declining woodland bird species. This work is in addition to the Queen’s Jubilee Program.

Nari Reserve is currently an open space reserve with sparsely planted trees and revegetation plots along the northwestern boundary.

Over the past six years, the local community in partnership with The Friends of Glenthorne has been revegetating parts of Nari Reserve.

The reserve will remain as an open space with mown green spaces between plots of planted vegetation.