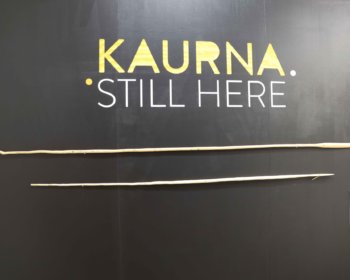 A partnership with First Nations artists and a free community event celebrating First Nations culture are just two of the activities to receive support from the City of Marion to mark National Reconciliation Week.

National Reconciliation Week runs from May 27 to June 3 with the aim of improving Australians’ understanding of our shared histories, cultures, and achievements with First Nations people.

The City of Marion began this sharing with the recent opening of ‘The KAURNA: Still Here’ exhibition at Gallery M at the Marion Cultural Centre.

The exhibition showcases South Australian First Nation artists Peter Turner and Clem Newchurch, responding to the Aboriginal Collection at the South Australian Museum and the works of George French Angas.

The exhibition first appeared at the museum and has been reimagined for Gallery M thanks to a partnership negotiated by the City of Marion with the artists, the museum and Guildhouse.

Mayor of Marion Kris Hanna officially opened the exhibition on 13 May.

“If you have any interest in Kaurna culture or the history of this place we live in, then this exhibition is well worth a visit,” Mayor Hanna said.

“This exhibition displays an intriguing revival of traditional cultural practices.

The City of Marion has provided financial support for a free community event celebrating Reconciliation Week being held at the Living Kaurna Cultural Centre at Warriparinga on Wednesday 1 June, 4-8pm.

The event will feature live music and cultural experiences including weaving and boomerang workshops and ochre play.

There will also be a market with bush foods and beverages available for purchase.

The event is being organised by Southern Cultural Immersion, in collaboration with Green Adelaide and the City of Marion.

Other Reconciliation Week events include an Introduction to Kaurna Language Workshop at the Cove Civic Centre on June 15, 10am to 12.30pm, and a free short-film showcase, Nunga Screen, at the Marion Cultural Centre.

“Marion is located on the traditional lands of the Kaurna people. We set up the Living Kaurna Cultural Centre at Warriparinga, near to where Sturt Road runs between South Road and Marion Road. It is an important cultural heritage site,” Mayor Hanna said.

“Marion was one of the first metropolitan councils to develop a Reconciliation Action Plan to improve relationships with Aboriginal people.”