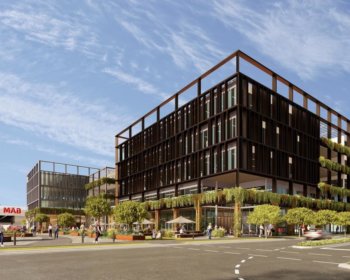 The old Mitsubishi factory site in Tonsley is to get a $47m retail, lifestyle and office hub in the new year, with council approval gained and the first tenants signed.

Peet has unveiled plans for a major retail and commercial hub at Tonsley after securing its first tenants and winning planning approval from the local council.

Marion Council has approved the first stage of the ASX-listed property developer’s plans, which include a $47m retail complex featuring a supermarket, cafes, restaurants, specialty shops and a multi-level gym and indoor bouldering facility to be operated by V2 Fit.

About 5700sq m of office accommodation will also be offered across three upper levels.

Meanwhile plans for a second stage, at the southern end of the site, will be lodged in the coming months.

It will be developed by social housing and community services provider Junction, which is set to move its head office and 150 staff to the precinct.

Construction of the first stage complex, on the western side of Tonsley Innovation District’s Main Assembly Building, is expected to commence early next year and be completed by mid-2024.

Peet managing director Brendan Gore said the development would have a strong focus on health and wellbeing.

“The new Tonsley retail and commercial precinct is a game-changer for the community, providing residents with a range of options including a supermarket, a cafe and delicatessen, a barber and more,” he said.

“Access to amenity like this is key to building self-contained communities and improving the quality of life which has been a goal of Tonsley Village.

“For commercial users, it offers a world-class building focused on health and wellbeing at the heart of the Tonsley Innovation District.”

More than 400 residents have moved into the residential component of Peet’s broader Tonsley Village project, which will eventually comprise about 850 apartments and townhouses for 1800 residents just north of the new office and retail precinct.

Boutique developer Otello will deliver the first stage of the mixed-use precinct, which according to the firm’s managing director Daniel Harris, has been designed to become a “world class, wellbeing-focused commercial and retail hub”.

“Through the design process, a set of principles were created which have driven the architectural response – with biophilic design, sustainability, connectivity and inclusivity as the key drivers,” he said.

Urban Development Minister Nick Champion said the retail and office hub would add to the hi-tech manufacturing and education precinct that had emerged at the former Mitsubishi site over the past decade.

“Tonsley Innovation District was conceived a decade ago as a major jobs creator – a sustainable economic base for future industries to replace the jobs lost when the Mitsubishi plant closed,” he said.

“Ten years on we have a flourishing workforce on-site, some 8500 students being educated within the precinct and a growing number of residents who now call Tonsley home, so there is a definite need for a contemporary retail space.”

'Peet's Tonsley Village secures approval for retail hub' by Giuseppe Tauriello originally seen in Adelaidenow Business, 12 September 2022. Picture: Artist’s impressions of Peet’s $47m retail and commercial hub at Tonsley. Image supplied by Studio Nine Architects . Licensed by Copyright Agency. You may only copy or communicate this work with a licence.