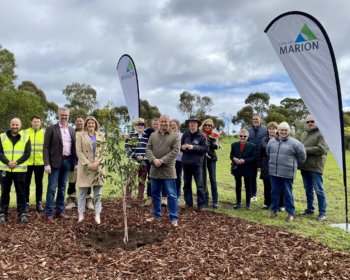 The City of Marion hosted a ceremonial planting of a mature eucalyptus tree at Nari Reserve at Sheidow Park today (September 2) to commemorate the Platinum Jubilee of Her Majesty, Queen Elizabeth II, and a revegetation project in this popular recreation area.

Council recently received $20,000 from the Australian Government Planting Trees for The Queen’s Jubilee Program for a revegetation project at Nari Reserve located southwest of the O’Halloran Hill Recreation Park.

The funding will be used to help create a canopy cover of 20 per cent vegetation in this 11ha Council reserve to improve the visual amenity, increase biodiversity value, expand green corridors, reduce noise pollution, and cool the area.

As part of the Australian Government Planting Trees for The Queen’s Jubilee Program, more than 400 local species seedlings will be planted in Nari Reserve in autumn 2023 with the local community members and the Friends of Glenthorne, a volunteer group committed to restoring native habitat in the nearby Glenthorne National Park – Ityamaiitpinna Yarta,

The first part of the project involved the ceremonial planting of an advanced Eucalyptus macrocarpa by Mayor of Marion Kris Hanna and the State Member for Davenport Erin Thompson, on behalf of the Federal Minister for Social Services and local Member for Kingston Amanda Rishworth.

An Australian Government Planting Trees for The Queen’s Jubilee Program commemorative sign will be installed at Nari Reserve later this year ahead of the vegetation planting in 2023.

Nari Reserve is currently an open space reserve with sparsely planted trees and revegetation plots along the northwestern boundary.

There are plans to incorporate the reserve into a multi-agency vision to develop a recreational and biodiversity corridor of private and public land called the ‘Great Southern Urban Forest’.

The Great Southern Urban Forest would encompass around 1000ha of undulating land linking the coast to the hills and forming a gateway to the southern suburbs and Southern Vales.

Over the past six years, the local community in partnership with The Friends of Glenthorne has been revegetating parts of Nari Reserve.

The reserve will remain as an open space with mown green spaces between plots of planted vegetation.

Council is aiming to create a canopy cover of 20 per cent on the reserve to cool the area, improve visual amenity and increase biodiversity value.

The Australian Government Planting Trees for The Queen’s Jubilee Program will enable the planting of more than 700 local species to meet that canopy cover target.

Photo: Taking part in the tree planting at Nari Reserve to commemorate the Platinum Jubilee of Her Majesty, Queen Elizabeth II, were the Member for Davenport Erin Thompson and the Mayor of Marion Kris Hanna, centre, along with, representatives from the City of Marion, Friends of Glenthorne and the local community.