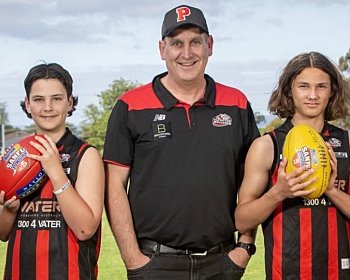 One of SA’s major footy clubs has taken out the SANFL Junior Club of the Year award after its success with the development of youth in the game through 2022.

The Plympton Bulldogs had an outstanding season at the junior level, with the U13, U15 and U16 girls, and U15 and U16 boys all winning premierships.

Junior director Jamie Morgan said receiving the award was the cherry on top of what had been a standout period for the club.

“It’s very pleasing and a reward for the large number of years of work we’ve put in to ensure our culture is where we want it to be and that our kids are getting the most they can out of the club,” Morgan said.

Plympton has experienced a consistent number of junior players through 2022, now playing host to 400 boys and girls and developing them for the future.

Morgan said Plympton’s efforts to grow its kids on and off the field had been the key to the club’s success.

“We want to make the best footballers and people that we can at the club,” he said.

“Development and success on the field is a plus – that’s what we all want as footballers – but we’re a community not just a footy club, we want to build their community connection with the club so that people mix and they don’t feel isolated – we value the off-field stuff very highly.”

An important component of the club culture is training on the same night as the seniors, who also experienced a strong season in the Adelaide Footy League.

Morgan said the experience allows the youngsters to feel welcome and also shows them what it takes to be a strong team.

“They understand it’s about hard work both on and off the field,” he said.

“Success is great but it’s about what the families and the players themselves put into it.

“We’ve been wanting to build the club as one for a long time and implement a sustainable footy program from youngsters to senior footballers – to show them a pathway is there.”

While Morgan was pleased with the season just gone, he and the club will both look to improve its junior and senior ranks even more next season.

“Our hope is a lot of these kids feel comfortable with the coaches and environment and progress into their senior football years,” he said.

“We need to make sure they’re still enjoying the sport and still improving on and off the field because they’re the foundation of our club and absolutely critical for us.”

'Plympton Football Club wins SANFL Junior Club of the Year' by Daniel Renfrey originally seen in Adelaidenow, Messenger, Sport , 21 October 2022. Picture: Plympton Football Club junior director Jamie Morgan with players L to R Angus 14yrs and Harper 15yrs. The club has won the SANFL's Junior Club of the Year award for 2022. Picture: Emma Brasier. Licensed by Copyright Agency. You may only copy or communicate this work with a licence.