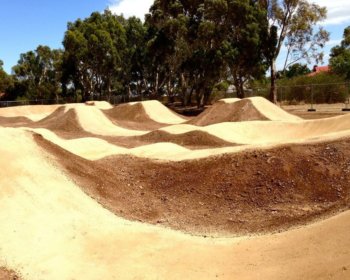 A second BMX track will be built alongside the Sam Willoughby International facility, currently under construction at Glenthorne National Park Ityamaiitpinna Yarta.

Mayor Kris Hanna today announced Marion Council will build a pump track for use by novice BMX riders and the wider community.

It will be built on the same site as the $6.05 million Sam Willoughby International Union Cycliste Internationale (UCI) Track that will cater for elite and club riders.

“With the addition of a pump track, we will have a BMX facility that can be used by riders of all standards,” Mayor Hanna said.

“A pump track can be ridden by first-time riders and kids while providing a challenge to more experienced riders.”

A pump track circuit is typically smaller than a regular BMX track. It features a circuit designed to be ridden completely by ‘pumping’, generating momentum by up and down body movements instead of pedalling.

Marion Council will spend $136,000 to build the pump track with work starting once the main Sam Willoughby track is completed later this year, depending on the weather over winter.

“We’ll soon be asking the community and BMX riders to help us design the pump track,” Mayor Hanna said.

“We would also hope that the community can help build the pump track, which we expect will open early next year.”

Work began on the UCI track, to be named after local BMX champion Sam Willoughby, in March.

It includes the main track, 5 and 8 metre hill starts, floodlighting, a clubroom, and parking for 108 cars. The track will be home to the Cove and Happy Valley BMX clubs.

The UCI track is being built opposite the $7 million Southern Soccer Facility, turning the area into a huge sports precinct for southern Adelaide.

The facility will contain three floodlit turf pitches with provision for a fourth, clubrooms and parking for 320 cars. It will be used by Cove Football (soccer) Club. Marion Council is providing $4.5 million in funding and the State Government $2.5 million.

The projects have received Australian Government funding through Move It AUS – Community Sport Infrastructure grants from Sport Australia. This included $200,000 for the soccer change rooms and $100,000 for the BMX clubhouse.