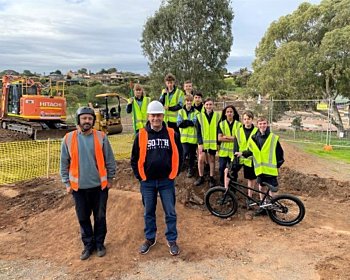 Young people in the City of Marion have played their part in shaping four new pump tracks recently built in the Hallett Cove, Sheidow Park and Marino areas.

Working with contractor Jason Cousins from Youth Services, the City of Marion incorporated the feedback from track users into the track designs, hosted workshops with students from a local school and conducted mentoring and training programs with a group of young people.

Youth Services is a social enterprise that uses the profits from building tracks, mountain bike paths and other youth spaces to fund training and mentoring programs for young people.

Students from Hallett Cove School also worked with Youth Services on the design of the new jump park replacing the old BMX track at Capella Drive Reserve at Hallett Cove, attending several workshops to learn about what is involved in creating bike facilities.

In the last design workshop, Jason invited a small group of students who were keen riders back onto the site during construction to hone their track-building skills.

Besides the jump park, a junior pump track was also constructed near the skate park as part of a recent $3 million, two-stage upgrade of Capella Drive Reserve.

Local riders also had some input into the design of the recently completed sealed pump track at Nimboya Road Reserve at Marino.

The original layout of the track was set down by Council, but Youth Services used the footprint and community feedback to add jumps and an “old school downhill snake run” that is proving to be popular with older skateboarders as well as young bike riders.

As part of their track work projects in Marion, Youth Services also engaged a group of six young people from diverse backgrounds and put them through a White Card course to obtain entry-level accreditation for construction sites. These young people now have the opportunity to do civil works training.

The new jump park and junior pump track at Capella Drive Reserve will be officially opened on Saturday, August 13, as part of formalities acknowledging the completion of Stage 2 of a $3 million upgrade of the recreation area in Hallett Cove.

The opening will coincide with the City of Marion youth event, Skate Daze 2, which will run from 11am to 3.30pm.

An official opening of the $1.6 million upgrade at Hugh Johnson Boulevard Reserve at Sheidow Park, which includes a junior pump track, has been rescheduled for Sunday, August 28, at 10.30am.

Picture: Jason Cousins from Youth Services, left, Marion Mayor Kris Hanna, and some of the students from Hallett Cove School who took part in a recent workshop to learn about the skills involved in creating the new jump park at Capella Drive Reserve.