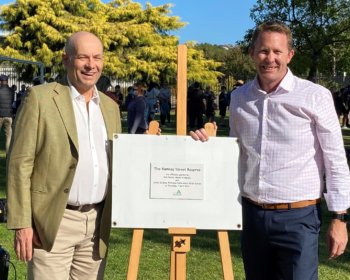 A partnership between the City of Marion and a local school has turned a much-used reserve into a place for quiet play and team sport.

Thanks to a $150,000 upgrade, Ramsay Avenue Reserve at Seacombe Gardens now has a set of permanent soccer goals, a three-on-three basketball court and a netball ring as well as a gathering area of log chairs and a table and a ‘ Giant Reading Chair’.

The City of Marion allocated $110,000 towards the project with the neighbouring Stella Maris Parish School contributing $40,000.

Students at the school use the reserve during recess and lunch breaks with the turf pitch also used for the school’s soccer practice and weekend soccer matches.

The new features at the multi-use reserve were officially unveiled today (April 7) with an opening ceremony conducted by Marion Mayor Kris Hanna and the principal of Stella Maris Parish School, James Quigley.

“Ramsay Avenue Reserve is well used by local children, especially the students at the Stella Maris Parish School next door. Marion Council was pleased to work with them when we consulted the community last year,” Marion Mayor Kris Hanna said.

“In addition to asking local households, we spoke to staff at the school and held a workshop with students to discuss plans for the upgrade.

“One of their great ideas was the raised garden beds so students can, in their words, ‘grow things and give back to the community’.

“The reserve also has a ‘buddy bench’ installed at the newly-paved entrance. Students who are lonely and need someone to play with them can sit on the bench to signal to other students to come over and invite them to get involved.”

The City of Marion has also worked with the Trott Park Men’s Shed to build an ‘outdoor library’ structure to house donated books that can be read whilst sitting on the Giant Reading Chair.

Council also commissioned South Australian wood sculptor Geoff Bromilow to create the kookaburra sculptor on top of the teepee structure in the reserve.

Mr Bromilow is well known for his artwork in nature-play areas and has produced several pieces for reserves in the City of Marion.

Other features of the reserve project include two new drinking fountains and a tap for the garden beds, upgraded irrigation throughout the site and new fencing and plantings to create barriers between the car park and the basketball area.

The City of Marion has also provided the school with nets for the soccer goals which they can install and remove as required.