Please note e-payments will be unavailable from 5 pm Thursday 30 June until 9 am Monday 4 July.
Skip to main content
About Council 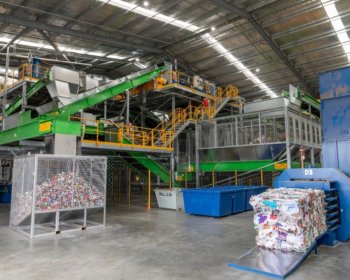 The official opening is timely, coming at the start of National Recycling Week, which this year celebrates its 25th anniversary.

The state-of-the-art 6,000m2 SMRF deploys world-leading advanced screening and optical sorting technologies to process 25,000kg of recyclables every hour including cardboard, plastic and glass, and is designed to meet the highest standards of recycling purity to ensure that nothing goes to waste.

The SMRF is Australia’s first major materials recycling facility designed to meet the Council of Australian Government’s Export Ban requirements, which ensures waste is processed and reused in Australia rather than being shipped overseas. Located in Seaford Heights, the SMRF is a joint initiative of Australian recycling and resource recovery specialist Re.Group and the Southern Region Waste Recycling Authority (SRWRA), which is a joint subsidiary of three South Australian Councils – City of Holdfast Bay, City of Marion and City of Onkaparinga.

The novel Joint Venture structure makes this the first Australian materials recycling facility to be developed through this type of true public-private partnership. The project has been partly funded by the Australian Government through a $5.3 million Community Development Grant allowing the facility to expand beyond processing the recyclables of the three partner councils to also service other regional councils and commercial businesses. SRWRA Chair Mark Booth said the SMRF was a gamechanger for waste management and resource recovery in South Australia, which as a state has led the way in recycling and reducing waste.

“The support of the Australian government and leadership of the three constituent councils will go a long way to addressing the need for increased recycling capacity across the state,” said Mr Booth. “The SMRF will set a new benchmark for materials recovery facilities and raise the bar as Australia’s recycling industry continues to evolve and mature to meet the growing demand for domestic processing.”

The SMRF employs 18 full-time staff with senior employees requiring advanced manufacturing skills to use the cutting-edge technologies to process the regions recyclables.

“This is the most state-of-the-art recycling centre in the country that is going to set a new benchmark for Australia,” Senator McLachlan said.

“Communities across Adelaide’s southern suburbs and the Fleurieu Peninsula can now be confident their recyclable waste is being processed to world-class standards and reused right here in Australia.

“Recycling is one of the most practical ways we can reduce needless waste going to landfill and save our planet from destruction. The Federal Government has provided significant funding to this project and we are committed to supporting the ongoing development of new recycling technology in line with our net zero emissions by 2050 target.”

“We all want to live in a community that is sustainable and at one with nature. We do not want future generations to exist amongst the waste we leave behind.” City of Holdfast Bay Mayor Amanda Wilson said this is an important step to take control of our waste, create local employment and drive new green economies.

“Keeping the recovery and reuse of valuable recyclable materials in Australia is vital to help build our circular economies and support a sustainable environment,” said Mayor Wilson.

“It's exciting to think that glass that our residents recycle through their yellow kerbside bins now has the potential to be converted into sand for use by us, and other local councils, in road and civil construction projects.”

City of Marion Mayor Kris Hanna said it is critical that Councils play their part in improving recycling for residents and businesses.

“This initiative will have long-lasting benefits for our community and provide value for ratepayers while protecting the environment. It is a demonstration of what can be achieved when government and the private sector work together,” Mayor Hanna said.

City of Onkaparinga Mayor Erin Thompson said this is a historic day for the residents of Southern Adelaide and the South Australian recycling sector.

“More than 300,000 residents in South Australia now have the confidence that their yellow-bin recyclables are being processed locally—bringing down costs, creating jobs and, when the facility’s capability increases, being reused in council projects,” Mayor Thompson said.

“They can also be confident we’re closer to achieving our vision for a recycling circular economy and tackling the challenges of climate change head-on.”

This media release is a joint release between the Cities of Marion, Holdfast and Onkaparinga, Re.Group and the Southern Region Waste Recycling Authority (SRWRA).