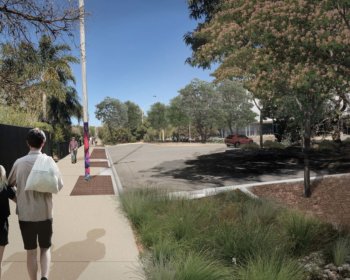 After extensive consultation with residents and ratepayers, Marion City Council has begun the next phase of its streetscaping project, this time on Sturt and Diagonal Roads, near the Marion Shopping Centre.

Works will be continuing in phases over the next few months, with the goal of giving the whole area a more consistent look and delivering a greener, more walkable neighbourhood.

Mayor Kris Hanna says there has already been some positive feedback from people walking on the new footpaths as the Council continues its streetscape project.

“The changes we have made to the crossfall grade of the footpaths, in many instances reducing a six per cent fall to just two per cent, are making the footpaths much more walkable for everyone,” he says.

“Our plans include better paving, some more seating, more greenery and trees that will ultimately provide shade.”

As part of the work, City of Marion is also installing locally designed water saving technologies to sustain the new plants.

Treenet inlets carry stormwater to small underground storage units which have been installed under new plantings, allowing them to access water that would otherwise flow out to sea.

Mayor Hanna says the transformation of the whole streetscape will be significant.

“There will be more integration with the Oaklands Park train station upgrade, extending that cleaner, brighter, greener look, around the whole Westfield Marion Shopping Centre from Diagonal Road right through to Sturt Road.”

He says while there may be some predictable delays to traffic, as with any streetscape or road projects, every effort is being made to minimise inconvenience.

Work on the streetscape project will continue into the new year and this month the scheduled works are being undertaken on Diagonal Road between Crew Street and Trott Grove.