Take a ride on a driverless shuttle 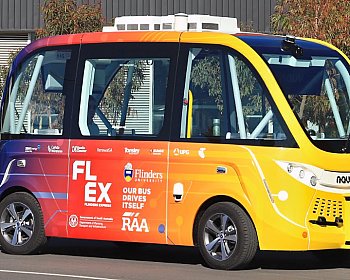 In a 'first mile — last mile' public transport trial, Flinders University has partnered with the Department of Planning, Transport and Infrastructure, RAA and several industry project supporters to provide a driverless shuttle at Flinders University’s Tonsley and Bedford Park campuses.

The Tonsley stage of the trial has now started and will see the shuttle used on public roads between the nearby Clovelly Park Train Station and Tonsley’s Main Assembly Building (MAB), then connections to bus stops on South Road and businesses within the Tonsley Innovation District.

Bookings for rides on the driverless shuttle are available from 10am until 2pm, weekdays. Book today and participate in a research study aimed at increasing public awareness and confidence in the technology, achieving integration with current road and public transport systems, and being carbon neutral.