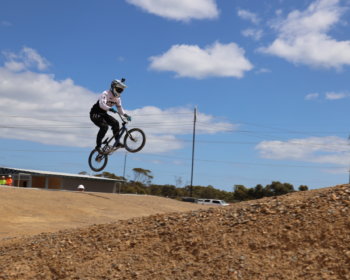 Elite riders have had their first run on the new $6.05 million Sam Willoughby BMX Facility at Glenthorne National Park-Ityamaiitpinna Yarta.

The testing marks a major construction milestone for the project and forms part of the first stage of the track’s international accreditation by governing body Union Cycliste Internationale (UCI).

The O’Halloran Hill development, which caters for both elite and club riders with an 8 metre and a 5 metre start hill, is the only one of its kind in South Australia.

Once complete, it will be equipped to host large scale international competitions and will become the new home of the Cove and Happy Valley BMX clubs.

Minister for Recreation, Sport and Racing Corey Wingard said the project is yet another example of the Marshall Liberal Government building what matters and investing in sporting facilities to attract and host world-class events.

“This project is a huge win for our state, with the track equipped to host large scale competitions such as state championships and BMX Supercross World Cups,” Minister Wingard said.

“We’re already hearing great feedback from the experts about this facility and also a hint of jealousy that kids across Adelaide will have this world class, purpose-built track right on their doorstep.

“The Marshall Government has committed more than $400 million to sport since 2018 which is helping grow jobs and the economy as well as encouraging increased physical activity.”

Marion Mayor Kris Hanna said seeing the riders in action provided a glimpse of the top-level events that could soon be hosted at the facility.

“South Australia has a rich pedigree of elite riders and this wonderful facility will no doubt be a drawcard for the young up-and-coming riders looking to pursue elite pathways,” Mayor Hanna said.

“Combine this with a pump track for all ages that will be built next year, and we will have a facility that the whole community can enjoy for years to come.”

Onkaparinga Deputy Mayor Simon McMahon said the facility will be an incredible asset to South Australian riders and southern communities.

“This international-standard facility will be a hub for people to keep healthy and active and stay engaged with their community, and it has the potential to grow the local tourism sector by attracting events down south,” Deputy Mayor McMahon said.

“This is a perfect example of the community, clubs, and state and local governments coming together to deliver a shared vision, and I thank all our partners for their unwavering commitment and support.”

Final track surfacing, building fit out, car park sealing, and landscaping will be undertaken in the coming weeks with the facility expected to be operational by the end of January 2022.

Construction of the $200,000 pump track, funded by Marion Council, will begin after the completion of the UCI track.

The UCI track is being built opposite the $7 million Southern Soccer Facility on Majors Road, transforming the area into a huge sports precinct for southern Adelaide.

That facility will contain three floodlit turf pitches with provision for a fourth, clubrooms and parking for 320 cars. It will be used by Cove Football (soccer) Club.

Marion Council is providing $4.5 million in funding and the State Government $2.5 million for the facility.

Both the BMX and the Soccer projects have received Federal Government funding through Move It AUS – Community Sport Infrastructure grants from Sport Australia. This included $200,000 for the soccer change rooms and $100,000 for the BMX clubhouse.