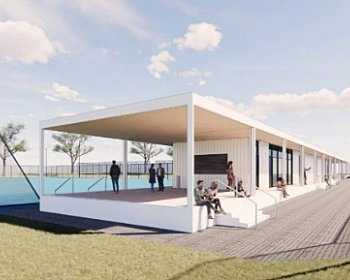 Article from The Messenger South, 2 December 2022

A bustling sporting club in the city’s south could soon receive a much need facelift to keep up with the ground's demands. See the designs here.

A southern suburbs sporting complex is set to look vastly different as City of Marion submit plans to demolish an old faithful.

The Cove Sports & Community Club in Hallett Cove has had plans tabled to reinvigorate their space and attract more clubs to Oval Road, starting with women's netball.

“New clubrooms will have a multipurpose space, change rooms, toilets as well as a canteen.

“They will be a wonderful improvment from what is basically a shed at the moment,” Mayor Kris Hanna said.

“It shows how busy the place is.”

The new clubrooms will have a multipurpose space with change rooms, toilets as well as a canteen.

Mr Hanna said the State Government has allocated around $2.5m towards the project while council will match, bringing the estimated cost to $5m.

In 2019, the site was awarded almost $400k in federal funding, after female sport had gone through the roof.

The southern side of the precinct will also be demolished and a new multi-use field will take the place of the BMX facilities and welcome more carparking spaces.

“I would anticipate that a lot of clubs will want to use that space and hire it out for things like trainings,” Mr Hanna said.

“In the future there may be one or two clubs who may want to own it and use it a lot of the time, that can be considered down the track.

“There has also always been a carparking issue, especially for the footy games, so to be able to improve the driveway and the parking, a lot of residents will be pleased.

“For too long they have suffered from that over flow effect.”

The Cove BMX club will officially move to the controversial Sam Willoughby International BMX track at O’Halloran Hill in the new year, after the track has been plagued by a number of disasters including the track ripping mid-way through a competition.

“I know that has taken a long time, but that will soon be open and availbale for the cove BMX club to use as their home base.”

The current plans are on public notification until December 14.

'The Cove Sports & Community Club set for million dollar facelift' by Emily Jarvis originally seen in The Messenger, 2 December 2022. Picture: Concept image of the Netball clubrooms. Design: Studio Nine Architects. Licensed by Copyright Agency. You may only copy or communicate this work with a licence.