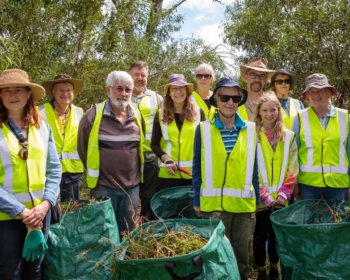 Photograph supplied to Landcare Awards by Friends of Sturt River.

The new award, aimed at recognising Landcare groups that conserve the environment in suburbs and regional towns, was one of nine top honours announced at the 2021 South Australian Landcare Awards Ceremony held on 31 March.

There were three finalists in the urban Landcare category with another City of Marion-based Landcare group, the Friends of Warriparinga, receiving a high commendation.

“Valuing nature is one of the Marion Council’s top priorities. This has led Council to collaborate with Friends of Sturt River to achieve tangible outcomes like the foliage renewal around the Oaklands Reserve wetlands,” Mayor Kris Hanna said.

“There are many dedicated volunteers in these environmental groups in the Marion Council area and they deserve recognition.

“Congratulations and a big thank you to the Friends of Sturt River.”

The award-winning Friends of Sturt River Landcare were recognised for their efforts to create a biodiversity corridor from the Adelaide Hills to the sea along the Sturt River.

Over the past eight years, more than 500 volunteers have established some 80,000 plants to support what remains of the original woodland, some of which exist within a mosaic of highly modified urban sites.

A surprising amount of wildlife has begun to repopulate the largest revegetation site, a bio-corridor at Oaklands Wetland and Reserve.

Friends of Warriparinga, category finalists, were shortlisted for their work over the past 25 years to protect, preserve and restore remnant vegetation at the Warriparinga, the last remaining natural stretch of river on the Adelaide Plains.

In Kaurna language, Warriparinga means ‘Windy Place by the River’. It is the start of the Kaurna Tjilbruke Dreaming Trail and an early European settlement site.

The South Australian Landcare Awards Ceremony was held at the Living Kaurna Cultural Centre in Bedford Park on 31 March. You can access the full list of winners here.