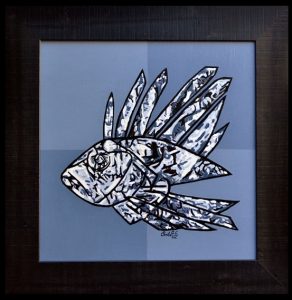 I paint with oils and a wide variety of engraving techniques including lino. I studied arts for over 6 years with the Plastic Artist Eduardo Esparza in Colombia at his workshop 'Carangano Grafico Taller'. My style has been described as contemporary and modern. I paint nature and animals, mostly marine wildlife.

I am an emerging young artist who migrated to Australia in 2008 looking for new opportunities and landed in this lucky country. After almost 7 years of hard work and study since I arrived in Adelaide, I felt the need to reconnect with the fine arts. I grew up in Colombia, South America – NOT COLUMBIA, under the mentoring of the well renowned Colombian Graphic Artist Eduardo Esparza, my Dad.
Since an early age I was in contact with oils, watercolours and acrylics and did my first engraving at the age of 4. I worked at my Dad’s workshop ‘Carangano Grafico Taller’ learning all the techniques and helping him making many editions of serigraphy. I spent my free time painting and helping students with the printing of their engravings while supervising their progress. At the age of 16 I left home and went to London for a year to learn English and to visit the museums and art galleries, Paris, Geneva, Genoa and Florence were on his cultural journey. All the art in Europe was overwhelming, so much history and talent inspired me, especially the Impressionists.
On my return to Colombia I decided to pursue a Bachelor’s degree in Animal Science, a very intense five and a half years. During this time my artistic production was minimum. Then, in cosy Adelaide, the spark of art came back in 2014 when I started painting again after a recess of almost 10 years. A visit to the workshop of Hans Heysen inspired me to go back and express my views of the world with colours and oils. My latest series called “Marine World” is inspired in the marine wildlife of Australia and some imaginary and real creatures that live in the ocean; I want to send an awareness message of protection of marine species, especially those endangered. I am one of those romantic people who believe that there is still hope in a world driven by corporate profit and greed.