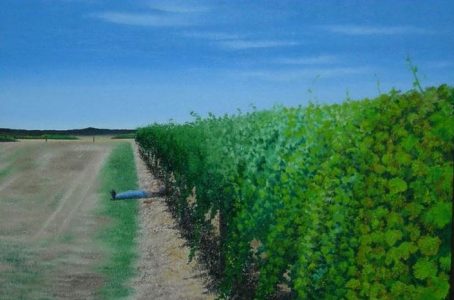 I have predominantly known for technique of White Charcoal on Black, however during the early to late 1990's in Adelaide my oils came to the forefront as cover artist of various publications and my sculptures gained fame from public exhibitions and television series exposure.

Rather than searching for prizes, I am content to explore, waging a constant battle with abilities and media believing the only contest is with myself. As my work has been in the shadows I developed the White on Black format. The Holy Grail is always to capture the light and the naked human form is the epitome of art – nature’s perfection in its glory. Most visual learning in my era began with white chalk on a blackboard, I take the viewer forward by harking on childhood memories. Observation of people in private moments is the basis of my work, I use no models. My works are a snapshot taken from my daily life. With eleven thousand works in thirty two countries, my work continues to be new and evolving, being handed down from generation to generation. The most satisfying thing as an artist is seeing new generations embrace my techniques.

In 1997 I was invited by Marion Council for the Exhibition, God and You, following success with The New Age Guardian Magazine with a publication of 50,000 copies bi monthly. I had no idea how to portray God and raced to the deadline, hanging the painting wet. It was one of the highlights of my career, seeing 400 people walk out of the Opening Night with paint on their fingers. They couldn't help but reach out and touch it. The Reverend Nutter called it the "only true and honest rendition of God he had ever had the privilege to see." The painting resides somewhere in the Yorke Peninsula. I take Commissions on merit not cost. I am highly involved with charity and conservation groups and whenever asked by various councils, media or educational establishments I am only too willing to lend my services to a wothy cause.