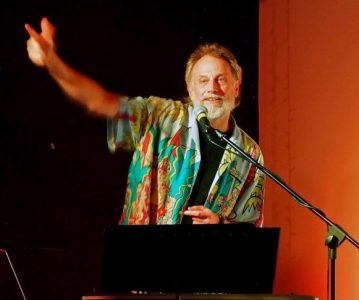 In 2014, I retired after 35 years as a neuroscientist, the last 20 of which were as Professor of Anatomy at Flinders University. I published more than 100 scientific papers on the microscopic structure and function of the nerves monitoring and controlling the activity of the internal organs. I also was heavily involved in teaching and innovative curriculum design for medical, science, and education students.
My poetry has been widely published in print and on-line, with many poems short-listed for major national prizes. I have published three books of poetry, two of which are in collaboration with visual artists, and all are accompanied by my electronic music.

As a scientist, my work on how nerves communicate with the internal organs was internationally recognised, including an honorary doctorate from the University of Gothenburg, Sweden. I won many awards for my teaching.
As a poet, my work has been selected for "Best Australian Poems 2008", "Best Australian Science Writing" in 2012 and 2013, and has been published widely nationally and internationally.
I have performed my poetry, music and videos at the Adelaide Fringe Festival, the Adelaide Cabaret Fringe, and the Queensland Poetry Festival. I collaborated on two productions of the Australian Dance Theatre, and have had three major collaborative exhibitions with visual artists.