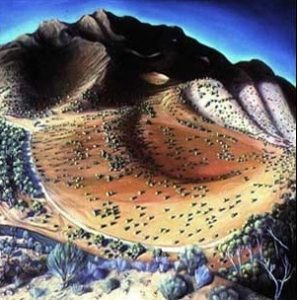 I enjoy creating in many mediums. I have concentrated on oil painting, chalk pastel drawing, etching and photography in the past years but spent a goodly part of my career making assemblage work, and was relatively successful in this medium.

I have discovered the versatility and mobility of gouache and watercolour recently and am busy compiling a full exhibition of work in this medium. In the past, my subject matter tended towards narrative story telling, then a period of severely stripped down conceptual works and upon arrival in Australia I fell in love with the landscape and have held a number of shows featuring mainly landscape works.

I am currently committed to a couple of portraits which should prove interesting.

I was involved with surfing for more than thirty years, including nine as designer of ZigZag Surfing magazine and as a regular participant in other competitive sports. Since living in Australia I have hiked the hills and gorges around Adelaide, Kangaroo Island, the Fleurieu and Eyre Peninsula’s, Flinders Ranges, and in Northern Queensland’s tropical rainforests as well as Tasmania’s temperate ones. I have lived in Coober Pedy's underground homes, sat painting on Broken Hill's 'broken hill', climbed Tasmania's ‘Frenchman’s Cap’ circumnavigated Uluru, scrambled up Northern Queensland's 'Black mountain', and solo rafted the Collins/Franklin Rivers. I've cycled the 600km ‘Mawson Trail’ from the Flinders Ranges to Adelaide and spent much time in Australia’s outback painting and documenting the landscape. As a result of these activities I have written two books featuring paintings, sketches and prints plus travelogue documenting my experiences and am in the process of completing a third.

In South Africa I began my arts career as a graphic designer and later studied fine-art part-time with the University of South Africa and went on to complete undergraduate and two post graduate qualifications; taking Honours (with an Emma Smith Scholarship) at Durban’s University of Technology (DUT) and some time later a Masters Degree (MAFA) at the University of Natal. Along the way I also studied Philosophy, English literature, Classical Culture and Counselling with the University of South Africa (UNISA) and since living in Australia, a Bachelor of Education (Art & Philosophy) at Tabor Adelaide. I am currently researching for a PhD in Education with Flinders University. During the period of my first post graduate study I began a curatorial position with the NSA Gallery continuing in this role, (whilst ‘piggybacking’ a 6 month stint as Art Master at Amanzimtoti High School) until accepting a tenured lecturing position at Alma Mater from 1989 –1998. I have served in many administrative positions included elected ones on: the Durban University of Technology’s Academic Board, was a founder member of the Executive Board of the States Visual Arts Forum, a delegate to the Masisukume Art Conference, served on the Acquisitions Board of the State Gallery was a founding member of the States Culture and Tourism Art Council, and was nominated for the position of Dean of the Art/Design Campus. As the elected President of one of South Africa’s oldest and largest arts organisations, the ‘KwaZulu Natal Society of Arts’ (KZNSA) for the constitutional maximum of three terms, I was the visionary and subsequent project co-ordinator behind the construction of what was to become the largest privately funded contemporary art establishment in South Africa; a complex comprising of restaurant (indoor/outdoor), gift shops, workshops and four galleries.

As an artist and photographer I have been a merit award winner and finalist in some of South Africa’s biggest national touring shows, and represented South Africa on the ‘LIFETIMES: Contemporary Art from Southern Africa’, in Munich Germany. I have won regional and national awards for my work, exhibited and been collected on three continents and interviewed for numerous articles ranging from art and culture to op-ed pieces including being voted by the Sunday Tribunes art critic as “Arts personality of 1996” for my part in the establishment of the KZNSA Arts complex, the same year in which I was awarded a page in the Maquis “Who’s Who of World Art and Culture”. My work also featured in a ten-page spread in the June 2001 edition of Australian Artist.

Since settling in Australia I have lectured at the Adelaide School of Art, co-hosted a radio program entitled “Artful thinking”, been an artist-in-residence at a number of Adelaide schools (Prince Alfred, Pilgrim) and completed a 5 week artist-in-residence program in Port Douglas.

My exhibition schedule since 1998 has been busy and includes a number of interstate shows.

From 2005 I battled cancer and in 2011 underwent open heart surgery, so one might say that the past few years have been a learning curve. Physical challenges behind me, I have consolidated the lessons learned and am once again writing, teaching and working productively towards another painting exhibition.