The Kaurna people are the original inhabitants of Marion

The original inhabitants of Marion, the Kaurna people of the Adelaide Plains, were supported by the Sturt River and surrounding bushland which provided food and shelter.

Visit the Living Kaurna Cultural Centre and the Stories of the Sturt River to learn more about the Kaurna people's strong connection to Warriparinga.

The early settlement of Marion

European settlers also found the banks of this river inviting and in 1838, just two years after the colony was founded, Colonel William Light's company, Light, Finniss and Co., laid out the Village of Marion.

The rich soil in the area produced vegetables, almonds, stone fruits and grapes.

The first grapevines were planted in the winter of 1838 on the banks of the river by Richard Hamilton, forebear of the Hamilton family which was to become a major wine producer in the district.

Read more about the early settlement of Marion on the Stories of the Sturt River virtual tour. 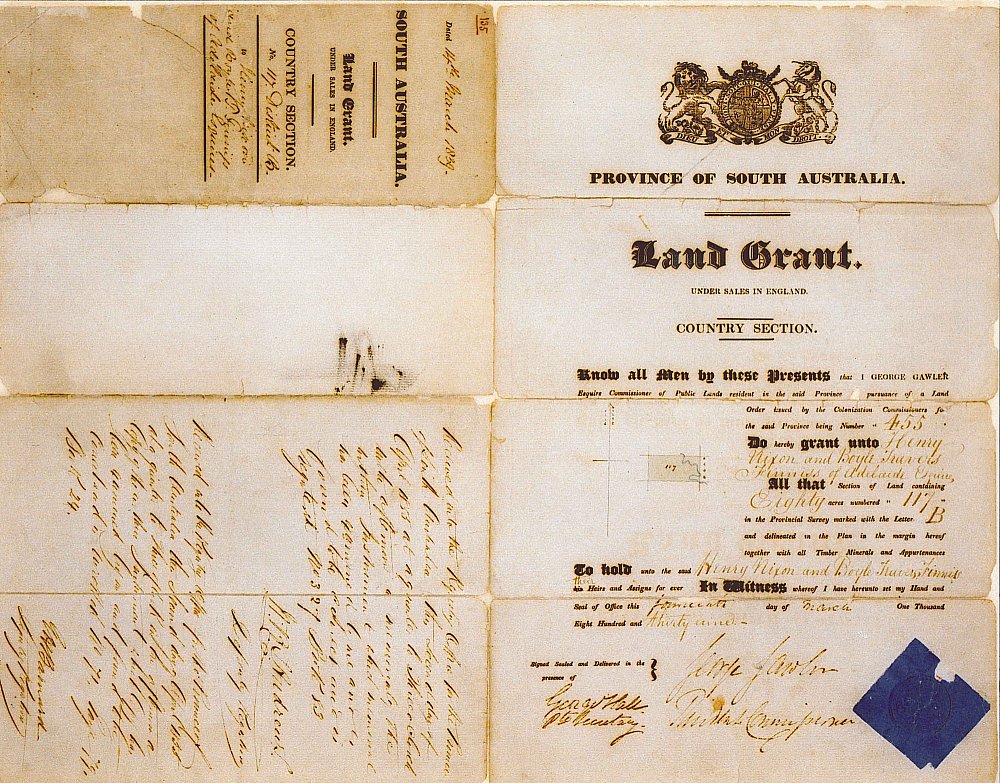 Marion was a rural community

A primarily rural community, Marion nevertheless had a sprinkling of local industries including mining and brickmaking.

The manufacture of cement at the Brighton Cement Works in Seacliff Park in 1882 was the beginning of a major Australian industry.

However progress was slow, the population at the turn of the century still being fewer than 350 people.

The market gardens flourished, earning Marion the nickname 'the Garden of Adelaide', with almond blossom tours being a highlight of the winter season.

Grape production also increased until, as well as producing a wide variety of wines, Marion at one stage was supplying 85-90% of Adelaide's table grapes.

The Depression of the late 1920s and early 1930s caused much hardship in the small community of fewer than 6,000 people.

Development continued slowly over the next few decades

Road and rail links gradually improved, easing transportation difficulties between the plains of the north and the hills in the south.

The First World War had an impact on this small farming community, when many sons and one or two daughters went to off to serve in the conflict, leaving the land tended by those at home or not at all.

'Glenthorne', a former horse stud farm at O'Halloran Hill, became a remount station where horses were trained for the Australian Army.

After the war, new suburbs such as Clovelly Park developed, the bitumenising of roads began and more drainage was built in the roads.

Whilst the Second World War had few immediate effects other than causing labour and materials shortages, the period after the war was to change the face of Marion forever.

With the post-war population boom, Australian cities expanded, increasing the demand for both housing and consumer goods.

There was a huge demand for houses

In the early to mid 1950s the South Australian Housing Trust began buying up large tracts of land for industrial development and the provision of low-cost rental housing. Large companies such as Hills began to establish in Marion, while existing companies expanded.

The following year the Chrysler company purchased 71 hectares of land in Clovelly Park and established a car assembly plant, one of the largest such operations under one roof in the southern hemisphere.

With industrialization in the northern part of Marion and the growth in housing in the southern suburbs of Hallett Cove, Trott Park and Sheidow Park in the 1960s and 70s, the modern Marion emerged and the rural life began to decline.

The opening of the Marion Shopping Centre in 1968 firmly established Marion as a major retail force in southern Adelaide.

Today, Marion offers a vibrant mix of industry, commerce and a relaxed lifestyle with an exciting future.

Tonsley Park's previous motor-industry site is now a high-value industry and educational precinct with a prestigious TAFE college and Flinders University's $120million School of Computer Science, Engineering and Mathematicals which opened in 2015.

In the south, the Cove Civic Centre with library, community and small business enterprise facilities opened in 2015. It also contains a cutting-edge art installation of slowing evolving videos of the Hallett Cove shoreline.

Oaklands Wetland opened to the public in 2013 and is delivering treated stormwater to council reserves while providing a haven for wildlife and a place for people to enjoy the natural environment.

The international standard SA Aquatic and Leisure Centre adjacent to Westfield Marion is now a firmly established destination for community and elite swimmers since opening in 2011.

In 2001 the innovative Marion Cultural Centre was opened in The Domain, an area immediately to the north of Westfield Marion. The Cultural Centre contains a modern library, multi-purpose theatre, art gallery, meeting rooms, licensed cafe and an extensive plaza.

Visit the Marion Heritage Research Centre for further information and research in relation to the City of Marion's history.

Books are available for purchase from the City of Marion's Administration Centre, 245 Sturt Road, Sturt or can be borrowed from any three branches of the Marion Library Service or the Mobile Library Service.