Not In Our Streets

The State Government is seeking to introduce new planning laws that could affect our residents’ homes and neighbourhoods, and the environment.

Marion Council is advocating on behalf of our community for the government to rethink the laws.
Residents are invited to support Council’s official submission to have the laws rewritten.

Council is concerned the laws could:

Marion Council is not anti-development. Council is concerned about infill north of Seacombe Road, and is comfortable with greater development in suitable areas further south.

In August last year, the State Government approved changes to the rules about what could be built in our city - the City of Marion Housing Diversity Development Plan Amendment (DPA).

These improvements were shaped by extensive community consultation.

The code places these gains in jeopardy.

Council is seeking assurances from the State Government that it will honour the promised improvements to the rules about what can be built in the City of Marion. 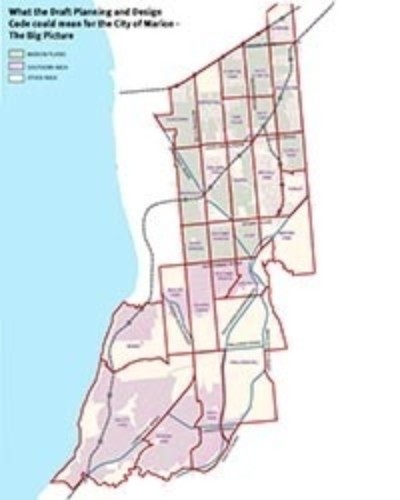 This map highlights how Draft Planning and Design could affect the City of Marion.

What you can do – show your support by 24 February

The State Planning Commission is consulting on the draft code.

Your are invited to support our submission to the State Government asking it to guarantee the changes it has promised.

All you have to do is complete a Statement of Support by 24 February at makingmarion.com.au/not-in-our-streets

Your Statement of Support will be included in Council’s official submission.

What is the Draft Planning and Design Code for South Australia?

All local government development plans will be replaced with one metropolitan, state-wide Planning and Design Code.

The code is being developed by the State Planning Commission and prescribes the types of development that can be built in a particular zone.

It is the state’s biggest planning reform in 20 years.

The code seeks to ‘simplify’ the State planning system and development assessment process by replacing individual Council Development Plans with one state‑wide document.

The number of development zones could reduce from 2500 to 55.

The code is a more than 3000 page document and is available online at saplanningportal.sa.gov.au

Why doesn’t Council support the code?

Council supports the modernisation of planning rules, but has serious concerns about how the new code will impact our residents, and people in other council areas.

The code is a technical document more than 3000 pages. Most people will find it hard to understand how it could affect them.

In its current form, the code doesn’t reflect the views of most City of Marion residents.

The code could override approved changes to the City of Marion DPA which, among other things, sought to restrain overdevelopment between Seacombe Road and the tramline, taking pressure of local streets.

Implementation has been put back three months following community backlash. Infill concerns remain. Council is asking for a second draft of the code with a further consultation opportunity.

What is Council doing?

Only the State Government can approve changes to planning rules.

Council is liasing with the State Government to try and secure a guarantee that the changes it approved to the City of Marion’s DPA in August will be maintained.

One of the main aims of the DPA was to restrict urban infill between Seacombe Road and the tramline.

Council will lodge an official submission with the State Planning Commission by 28 February.

The submission seeks to tackle the impacts of urban infill, encourage development in appropriate areas, introduce more rigorous design standards for houses, and protect the environment.

Households throughout Marion will be sent a flyer asking them to support Marion’s submission.

Council is also calling on the government to delay the introduction of the code to 1 January next year.

The government is being urge to release the next version of the code for public consultation prior to implementation.

February 2016 – Council begins work on how to reduce excessive infill

Please return to this page for updates.