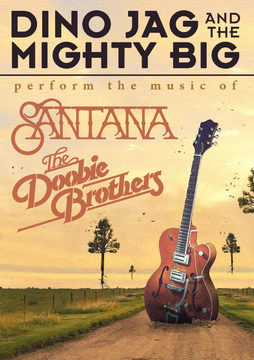 "Dino Jag & The Mighty Big" launch their first show together performing the music of two iconic classic rock legends - Santana and The Doobie Brothers. The band fronted by international award-winning singer songwriter Dino Jag will feature a dynamic lineup of Adelaide's finest musicians together on stage to deliver a high-impacting show filled with the big songs and hits released by these two legendary bands.

2019 also coincides with the 20th anniversary of the release of Santana's Grammy Award-winning album Supernatural and the 50th anniversary of the legendary band’s performance at the 1969 Woodstock music festival. These two incredible milestones with also be celebrated during the show with some of the band's classics including Black Magic Woman, Evil Ways, She's Not There, Well Alright and Smooth. In a bizarre twist of fate, Dino Jag met Santana's band at the age of 17 and got to jam with them when they came to Adelaide to perform at the Apollo Stadium.

"It's a crazy story which I'm looking forward to sharing with everyone at the concert," says Dino Jag. The show will also include many of the gems from the The Doobie Brothers like Listen To The Music, Takin' It To The Streets, What A Fool Believes, Long Train Running and so many more. This show will be jam packed with a sensational selections of songs that will take you on a musical journey spanning 50 years of timeless music from these two iconic bands. Strap yourself in for a Mighty Big night!