UPDATED - Marion Council will progressively reopen more than 2kms of the Coastal Walkway over summer as repairs continue to the 20-year-old structure.

Engineers are systematically repairing the walkway following detailed structural investigation and assessment, which began in June.

The work could extend the life of the walkway by about 10 years and follows the re-opening of sections at Marino Rocks Boat Ramp and Marine Parade in October.

The majority of the walkway is expected to be re-opened by February 2020.

Current investigations and repairs will cost about $238,000 and include installing new timber bracing and inserting metal rods into existing footings to improve stability.

Work is being funded from Council’s existing budget.

Diversions will continue to be in place around Kurnabinna and Grey Road gully sections, while further investigations are undertaken.

Council endorsed a $4.8 million plan to upgrade and renew further sections of the 8km walkway on 26 November.

Council has committed $2.44 million, and will seek matching funding from State or Federal governments to complete the necessary renewal work.

Council has developed a long-term renewal plan to completely rebuild the structures, which would cost an estimated $14.5 million over 15 years.

Please click below to see the media release announcing the reopening.

The map below shows the sections that are expected to be open by February 2020: 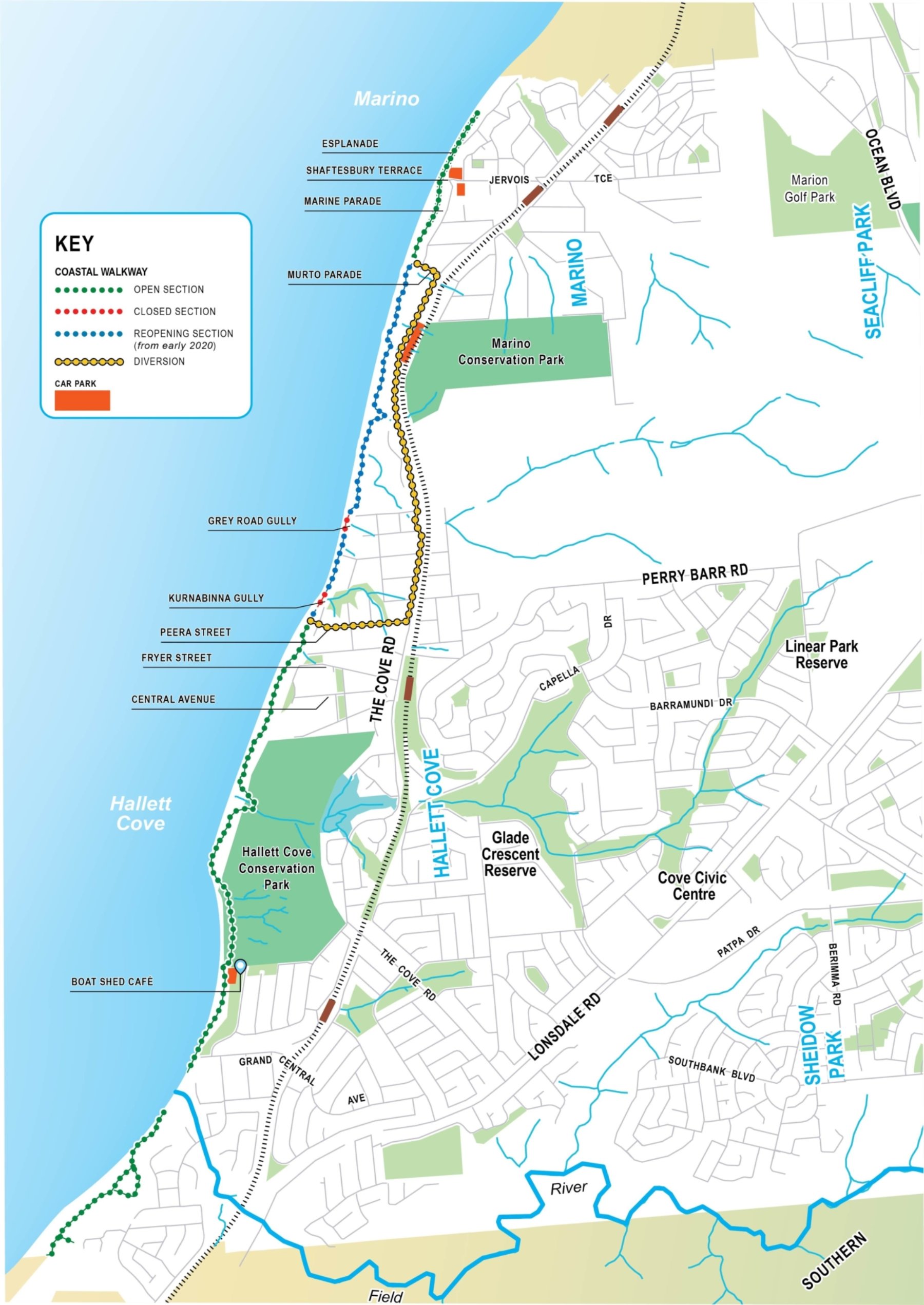 The map below shows the sections that are currently accessible: 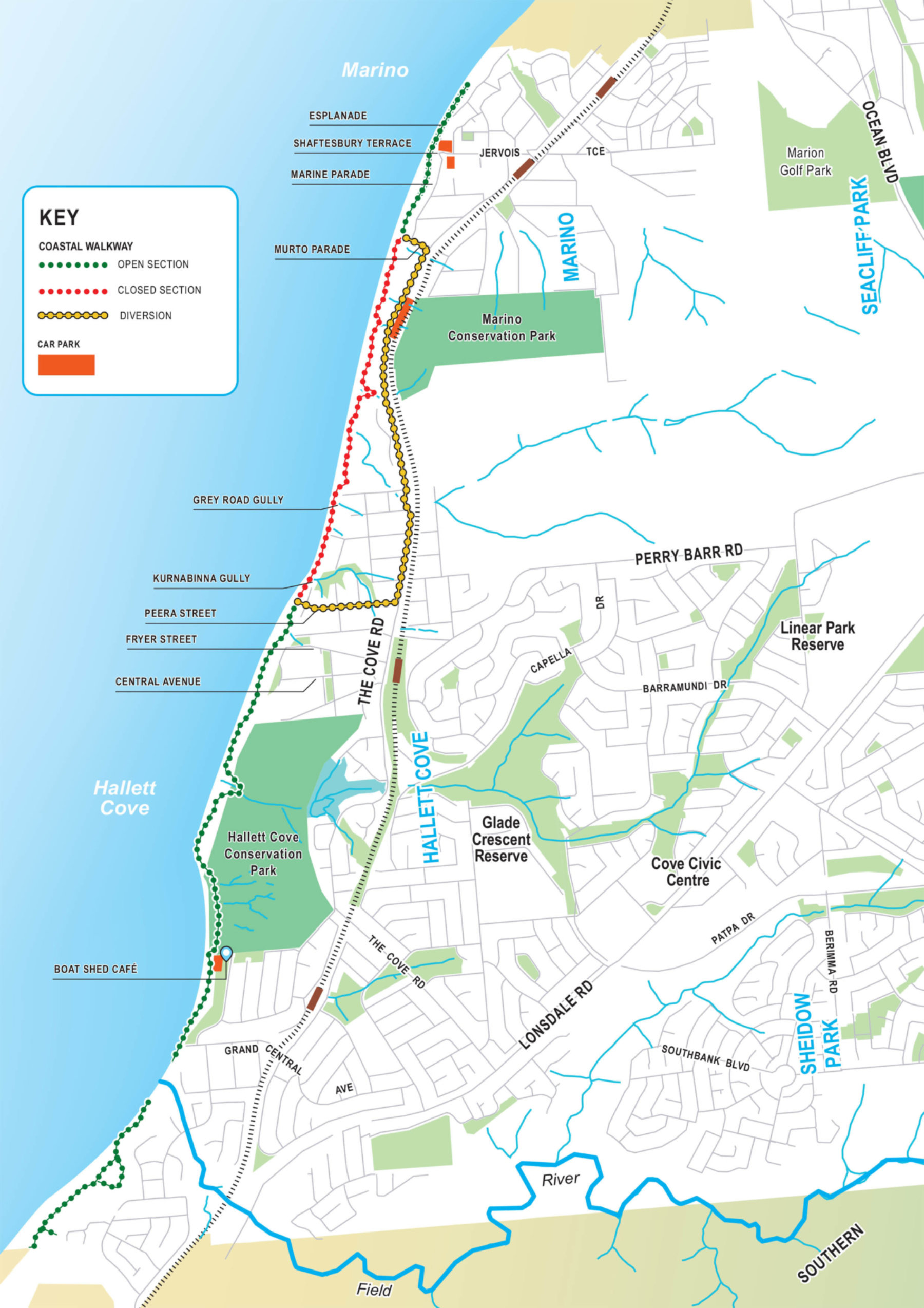 We appreciate your patience while we do everything we can to safely re-open the walkway as quickly as possible.

Marion Council temporarily closed a section of the Coastal Walkway between Marino and Hallett Cove for repairs.

Diversions are in place between Murto Parade, Marino, and Peera Street, Hallett Cove so people can enjoy the remainder of the walkway.

The Coastal Walkway runs about 8km in Marion from Marino Esplanade to Hallett Cove Headland Reserve. The section that has been temporarily closed is about 2km.

Why was the section closed?

An engineering audit recommended part of the walkway should be closed as a safety precaution while repair work is undertaken.

As a result of a routine inspection, staff engaged an engineer to undertake a detailed assessment of the walkway.

The engineers recommended repair work to timber boardwalks and footings along parts of the structure.

The walkway was built in the late 1990s.

When will the section re-open?

More than 2kms of the walkway is expected to reopen by February 2020.

Council will progressively open more than 2kms of the coastal walkway over summer.

Council also has also endorsed a $4.8 million plan to upgrade and renew further sections of the 8km walkway.

Council has committed $2.44 million, and will seek matching funding from State or Federal governments to complete the necessary work.

What’s being done to fix it?

Council has engaged structural engineers to progressively inspect 560 footings and the wooden structures across 12 sites which had been temporarily closed. Investigations have involved earthworks, geotechnical inspections and an assessment of each structure to determine its condition before repairs are made.

Repairs are being undertaken systematically by a specialist engineering company.

The Marino Rocks Café and the Boatshed Café are open and accessible.

What plans does Council have to protect the walkway into the future?

Council will seek to address the impact of stormwater and erosion on the Coastal Walkway as part of a broader Coastal Walkway Asset Management Plan it will receive in November 2020.

Updates will be provided on this page, our Facebook page, and in the local Coast City Weekly newspaper.