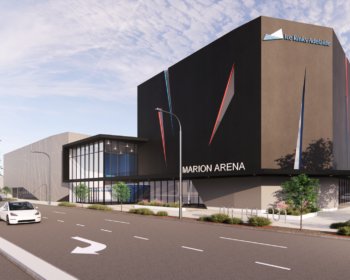 The City of Marion has cleared the way for private developers to secure a 42-year lease on a council-owned site in Marion to build a $20 million arena for ice sports and rock climbing.

After receiving an independent traffic management report on the land at 262A Sturt Road at their General Meeting this week, Elected Members authorised Council Management to negotiate the final terms of the lease with investors Ice Rinks Adelaide and the Pelligra Group.

“We have agreed to lease the land which is next door to Club Marion in the Marion Sports Precinct,” Mayor of Marion Kris Hanna said.

“We recognised that traffic and parking were issues of concern to the community that needed to be addressed.

“Council obtained an independent traffic report that found these issues can be solved.

“The developers are proposing to put in a multi-deck car park to take care of the parking issue.

“It should be noted that finalising the 42-year lease is just the next step in this proposal.

“The private developers seeking to build this ice arena proposal still need to submit plans and go through the planning application process.”

Following community consultation, Council amended the Community Land Management Plan (CLMP) in June for the 10,000sqm site at 262A Sturt Road to allow facilities for recreational purposes to be built on the site.

Ice Rinks Adelaide and the Pelligra Group want to build a single rink arena with three different standards of rock climbing walls on the land.

Their arena proposal is smaller in scale than an original two-rink concept originally put to the Council back in 2018 and involves no capital investment from the City of Marion.