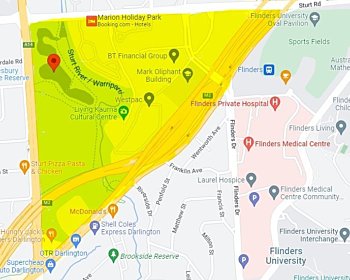 A proposal to create a new suburb within Bedford Park, named after the well-known Kaurna title ‘Warriparinga’, will be explored by the City of Marion.

At their recent General Meeting Elected Members supported a motion to initiate some consultation on the idea by contacting landowners in the proposed area bounded by Sturt Road, Marion Road and South Road.

Representatives of the Kaurna nation and other stakeholders would also be consulted.

The motion was drafted by Marion Mayor Kris Hanna who argued that the proposed suburb area was historically known as “Warriparinga” by the Kaurna people, commonly translated as “windy place by the river”.

Mayor Hanna also noted that most of Bedford Park was located on the other side of South Road from the proposed ‘Warriparinga’ suburb and the character of this area was completely different.

“South Road is a significant separating barrier in Bedford Park where most of the suburb is characterised by a long-standing residential area and Flinders University and the Flinders Medical Centre,” Mayor Hanna said.

“In contrast, the subject land is characterised by a unique riparian setting by the Sturt River and wetlands, with a variety of commercial and some public premises.

“There is a current proposal to develop an ‘elders’ village” for Aboriginal people, and substantial Marion Road commercial properties.

“An Aboriginal suburb name could be viewed as especially appropriate for a distinct area which is the subject of continuing strong feelings of connection by Kaurna people.”

If the Council receives sufficient positive feedback for the creation of the proposed ‘Warriparinga’ suburb from local landowners and the Kaurna people, it will formally consult with emergency services and Australia Post and consider submitting a proposal to the Surveyor General.

The Surveyor General has the authority to decide whether to initiate a formal process to create a suburb, which would involve further consultation.

Besides its Kaurna name of Warriparinga, in the 19th century, the area was also known colloquially as “Laffer’s Triangle” after the farmer who settled there.