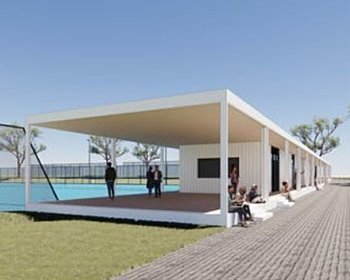 A planned multi-million dollar upgrade of the Cove Sports and Community Club has taken a step forward with the City of Marion now going ahead with the detailed design and tendering phases.

At its recent General Meeting, Council Members endorsed a Prudential Report assessing the $5.75 million project, giving the green light for the administration to complete detailed designs and then award a construction contract.

The project is Stage 1 of the planned upgrades for the facility on Lonsdale Road which is home to six affiliated clubs and services nearly 24,000 people in the Hallett Cove, O’Halloran Hill, Sheidow Park and Trott Park area and beyond.

Stage 1 will deliver a new netball facility with additional courts and reconfigure the vacant BMX/soccer areas of the site to create a multi-sport field for cricket, rugby, soccer and community recreation. An additional 188 car parks will also be built.

The $5.75 million price tag for Stage 1 at Cove is included in the Council’s 2022/23 Annual Business Plan and the following year’s budget with nearly half the cost covered by a 2022 State Government election commitment of $2.5 million for the project.

A grant funding application for that pledge has been submitted to the Office for Recreation, Sport and Racing.

There are plans for a Stage 2 upgrade at the Cove Sports and Community Club, but no timeline has been set. This stage would comprise a new Cove Sports clubroom, realignment of the existing oval, play spaces and landscaping.

You can read more in the minutes of the Council's General Meeting here.

Image: Artist impression of the proposed new netball facility at the Cove Sports and Community Centre.