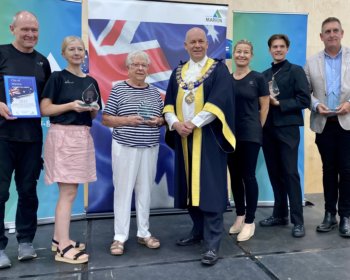 Pat Munden, known affectionately as the “matriarch’ of the Cooinda Neighbourhood Centre, is the City of Marion’s Citizen of the Year for 2023.

Ms Munden, of Oaklands Park, who has volunteered at the centre for 40 years, has also received a Commendation in the South Australian 2023 Award for Active Citizenship.

“Our nominees reflected the diversity and active citizenship within the Marion community with individuals and groups put forward for their involvement in conservation, charity work, community well-being and youth engagement.

“I congratulate all our nominees and I thank them for everything they do to make Marion a better place.”

Citizen of the Year Pat Munden reached the milestone of 40 years of volunteering with the City of Marion in November last year.

Ms Munden organises the rosters and coordinates the volunteers, grocery shopping and cooking for the Cooinda Café at the Cooinda Neighbourhood Centre.

Pat is also well-known for her skill with ceramics and runs ceramics classes at the centre on Tuesday and Thursday evenings.

Young Citizen of the Year Zane LeBlond is an active Member of the City of Marion’s Youth Collective Committee (YCC), volunteering his time and social media skills to many events for local young people.

The 18-year-old from Oaklands Park was also involved in a Channel 44 Community Television documentary on the Skate Daze 2 event and Stage 2 opening at Capella Drive Reserve at Hallett Cove and he facilitated workshops for the YCC for their VoiceIt! Report.

The Sports Person/Team of the Year Award was presented to Jamie Morgan.

Mr Morgan is the director of the juniors and seniors at the Plympton Football Club, and he played an instrumental role in the Bulldogs taking out the SANFL Junior Club of the Year Award for 2022.

Marion’s Community Event of the Year Award went to the Oaklands Estate Reserve parkrun which was established in early 2022 by Denise Brent, Kevin Thomson and a team of volunteers and has become extremely popular with local residents.

This event is part of the parkrun movement where volunteers run free 5km events for walkers, runners, and spectators on Saturday mornings.

The Oaklands Estate Reserve parkrun event provides a positive outlook on fitness and they provide a visually impaired guide when required.