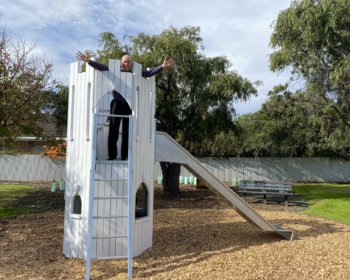 A local reserve designed for younger children in the City of Marion has recently undergone a storybook-style upgrade with a distinctly medieval theme.

When visitors head to Peterson Avenue Reserve they are invited into the ‘Kingdom of Marion Upon Sturt’ complete with a castle, a keep, a sword in the stone, a wishing well and treasure chests.

But there is a modern twist with children being able to traverse the imaginative play spaces via a child’s scooter track.

The $136,000 upgrade at Peterson Avenue Reserve at Mitchell Park was officially opened by the Mayor of Marion, Kris Hanna, on Wednesday, May 11.

“The reserve was last renovated in 1996 so this is a much welcome upgrade for the community,” Mayor of Marion Kris Hanna said.

Today the entrance is marked with a map of the Kingdom of Marion Upon Sturt which includes the original City of Marion Coat of Arms.

An Owl Shield marks Peterson’s Castle which houses a spiral staircase to a new slide as well as a play panel. Nearby is the Sword in the Stone.

The upgraded shelter structure has been renamed Alawoona Village and has a new picnic table and seating.

The Trott Park Men’s Shed has crafted two wooden treasure chests for imaginative play and children can also enjoy a new swing set and a wooden wishing well (filled with mulch) and throw balls at a target practice post.

The $136,000 budget also covered the installation of a scooter track, additional seating, a drinking fountain and a new irrigation system for the grassed areas and landscaping which includes six new deciduous trees.