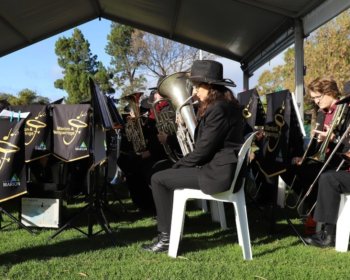 The City of Marion has signed off on a five-year funding agreement with the Marion City Band, continuing a half-century tradition of supporting this important cultural institution.

The agreement provides an annual fee of $37,912.50, plus CPI increases and will be incorporated into Council's 2022/2023 Annual Business Plan.

An additional one-off payment of $10,000 was also approved to help the band recover from losses incurred due to COVID-19 restricting their ability to fundraise and perform at events and competitions.

“Like many sporting clubs, the Marion City Band is a wonderful training ground - for young people especially,” Mayor of Marion Kris Hanna said.

“Many people join to learn an instrument and they are able to do so in a safe and encouraging environment. Marion City Band also performs music at civic functions and community events.”

The City of Marion has supported the Marion City Band since 1970, with formal funding agreements in place since 2002.

The band’s volunteer governing committee operate three bands for musicians of varying skill levels, and they currently have just under 60 members aged between seven and 70 years of age,

According to a report presented to Council, the band has lost around $20,000 in annual income over the past two years because COVID-19 restrictions have prevented them from attending events and competitions and from actively fundraising.

In 2018 and 2019 they performed at 22 different events each year including the Anzac Day Youth Vigil, Edwardstown Dawn Service, the Adelaide Christmas pageant, and Marion’s Christmas carols.