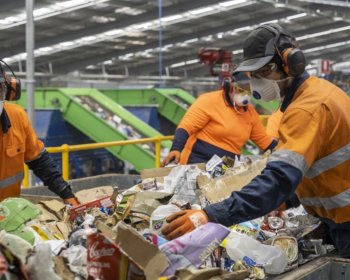 As part of National Recycling Week, the City of Marion is showing residents what happens to the items disposed of in kerbside bins with a tour of their national award-winning recycling facility and landfill operation at Seaford Heights and an organics processing site.

The full-day tour is being held this Friday, November 11. The tour is fully booked, however, there are plans to run further tours in 2023.

The SMRF was officially opened in October 2021 and is a joint initiative of Australian recycling and resource recovery specialist, Re.Group, and the Southern Region Waste Resource Authority (SRWRA), a joint subsidiary of three South Australian councils – the City of Marion, the City of Onkaparinga and City of Holdfast Bay.

The SMRF is not only South Australia’s largest household recycling facility, it is home to world-leading advanced screening and optical and robotic sorting technologies funded by Federal and State Government grants.

The 4,400m2 facility has been designed to meet the highest standards of recycling purity to ensure nothing goes to waste. The use of recycled glass and sand from the facility in road and civil construction projects also supports the business goal of being a leader in the transition from recycling to a circular economy.

The SMRF’s has the capacity to handle up to 60,000 tonnes of yellow-bin recyclables every year. Not only is the facility processing household recycling from the Cities of Marion, Onkaparinga and Holdfast Bay, it is also processing recyclables from councils across the Fleurieu and Kangaroo Island, servicing more than 360,000 southern residents.

Besides SMRF, Council’s Recycling Facilities Tour will also include a visit to the organics processing out at Peats Soils in Brinkley.

Planet Ark’s National Recycling Week runs from November 7 to 13 and is an opportunity for the community to learn how they can reduce their environmental footprint and prevent waste.

During National Recycling Week, the City of Marion will also be sharing top tips for recycling to keep resources out of landfill.

The City of Marion has received new instructions from our recycling partner about what to do with lids, namely.

Please be aware that these instructions are for the City of Marion area. It may be different in your local area so check with your local council or recycler.

REDcycle has temporarily closed its soft plastic drop-off points at Coles and Woolworths supermarkets as their recycling partners have temporarily stopped accepting and recycling soft plastics due to several unforeseen issues exacerbated by the pandemic.

For now, soft plastics should go in the red bin rather than return to the store and cannot go in the yellow bin.

National Recycling Week was founded in 1996 as an opportunity for Australians to take waste and recycling into their own hands.

According to Planet Ark’s research, since 1996 the annual recycling rate in Australia has increased from just 7%, or 1.5 million total tonnes recycled, to more than 60% of all disposed materials, around 43 million tonnes each year.