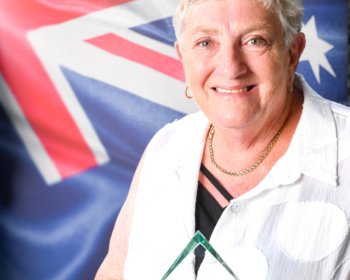 Nominations are now open for the City of Marion’s 2023 Australia Day Citizen of the Year Awards.

These annual awards recognise the individuals, organisations and event organisers who have made a positive contribution to the Marion community.

In 2022 Pauline Glover, a resident who has spent decades reaching out to the vulnerable in the Marion community, was named Citizen of the Year. Dr Glover is encouraging the community to nominate local “quiet achievers’ for the 2023 awards.

“It is the silent achievers that never get recognised. They are quietly working and contributing in many ways often over many years. If you know them, consider taking the time to make that nomination, and I am happy to help with the process,” she said.

James Beaumont, an advocate for young people struggling with disability and mental health issues, received the Young Citizen of the Year Award.

“Nominating an individual, group or team is the best way to their amazing work reach a wider audience in the community and gain the recognition they deserve,” he said.

Skate Daze organiser Susan Evans from On The Flip Side said: “These are really important awards because they show your support for people who are doing great work in our community.”

Team Captain Sophie McClure said: “Being awarded for mentoring young girls is a massive achievement but it’s more than that – it’s about seeking a positive future for our community and player pathways which is a win in any sport.”

Members of the community are invited to submit nominations in these categories. Areas of service can include education, health, fundraising, youth outreach, charitable and voluntary services, business, sport, arts, and the environment.

The winners will be recognised at a special community celebration event.

Visit the City of Marion website for nomination forms and more information, including details of past winners.

Nomination forms are available on the City of Marion website or from the Admin Building on 245 Sturt Road, Sturt. Nominations are open until Friday, 18 November 2022.