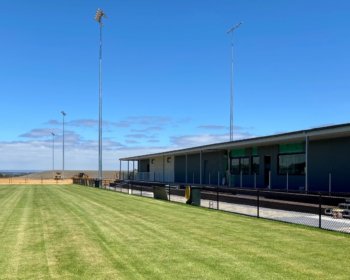 COVID-19 related delays have led the City of Marion to reschedule the official opening of the $7 million Southern Soccer Facility on Majors Road at O’Halloran Hill to April 30.

Unfortunately, the rescheduled opening means Adelaide United will not be able to play a feature fixture as previously advertised on April 9.

However, the April 30 opening will kick off with a MiniRoos Gala Competition in the morning with special guests invited to an official launch ceremony.

Marion Council has contributed $4.5 million towards this $7 million Southern Soccer Facility to meet the growing demand for soccer pitches in the south.

Once completed, the Southern Soccer Facility will become the home of the Cove Football (Soccer) Club and will offer three turf soccer pitches for competition.

This will significantly increase the competitive capacity of the Cove Football Club which currently has a single pitch.

Their new facility also boasts a new clubroom and plenty of car parking.

There is also space available for a fourth pitch to be built as a future project.