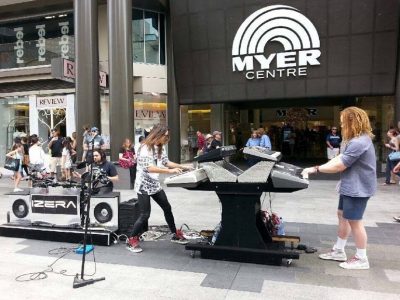 Izera is a 3 piece Synth Rock band from Adelaide.

With more keyboards than you've ever seen on one stage, and a drum kit th...at will give you flashbacks of the 80's, they are a band that just wants to give your ears something you've never heard before.
The catch is... most the time, the sound will find YOU.
You can hear the band most weekends playing on Hindley Street. (or occasionally in a venue with other great local artists).

Izera takes influences from all corners of the music world. Citing influences from 80's rock, heavy industrial, to things jazzy, even pop songs that you're hearing every 5 minutes on the radio, and also most things in-between.
The band shines, but goes hard.

Izera opened for Gary Numan, and Pop Will Eat Itself both in 2014. Both garnering great responses from show-goers and headline artists alike. We hope to expand further and open for many more influential artists yet to come.

Now it's 2016, and the band is looking stronger than ever. More active, more fun, and heavier than ever too.
We have so much more to come, so if you're interested in Izeras music, or just interested in local music and seeing new things, follow us on Facebook

Opening for Gary Numan and Pop Will Eat Itself, that feels like an award to us :)